Government-approved fire testing regimes which are used to judge the safety of external cladding systems on buildings are based on how fire behaves when indoors, the Grenfell Inquiry has heard. 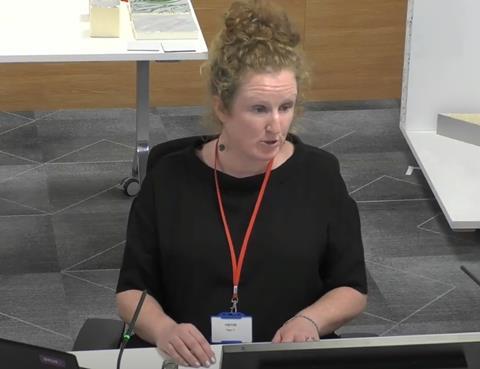 It came amid a forensic assessment of the flaws within the UK’s fire safety testing systems over the past 70 years delivered by Lane, a fire safety expert who has spent nearly 19 years at Arup.

She told the inquiry that ‘reaction to fire’ test regimes referenced in Approved Document B of Building Regulations as a measure of classifying the safety of building materials are based on how fire is expected to behave within enclosed rooms, not external walls.

She said: “The ’reaction to fire’ testing regime is associated with internal room fire phenomena, yet they are relied upon in the statutory guidance document to reduce the surfaces’ susceptibility to ignition from an external source and to reduce the danger from fire spread up the external face of the building.”

She added that the ‘Class 0’ specification for building materials, which supposedly marks a cladding system as safe to use on external walls, is actually based on two UK testing regimes used for internal fires.

Lane said that just one of the national ‘reaction to fire’ tests included in the government’s statutory guidance tested the spread of flames over surfaces, and this only measured spread in a horizontal direction, not vertically, as would be expected in an external cladding fire as seen on Grenfell Tower.

She went on to detail how the definition of ‘Class 0’ for external cladding systems has “degraded with time” since its introduction in 1965.

The minimum fire performance for external walls was watered down in 1985 from requiring construction using non-combustible materials to materials of “limited combustibility”.

She told the hearing: “Extensive work seems to have gone into defining these tests, how to derive results from them and how to rely on them to classify construction products and materials.”

Lane was speaking as the second module of the hearing into the tragedy, which killed 72 people in June 2017, continued its focus on the role of product manufacturers and suppliers.