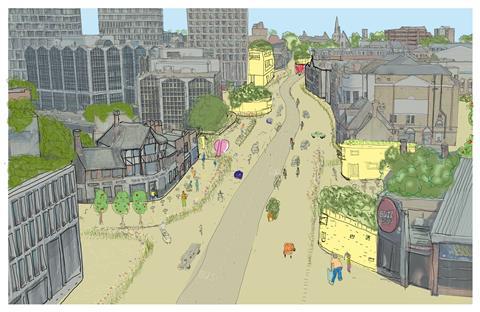 Government research shows that the car is still the most popular form of transport. Only trips of under a mile are taken on foot. That means that a large part of local trips, under five miles are done by car. If all local trips would be done by foot or bicycle car traffic would be drastically reduced. In this proposal the road has been refigured: a bus lane runs through the middle and on both sides of the bus lane the road is shared by cars and cyclists. Therefor cars have to adapt to the speed of the bicycles which in turn will encourage people to leave the car at home. The pavements are wide and house playgrounds, bicycle storage and gardens. The edge between terrace and road collects water and along this collector plants grow.

Buildings protrude into the high street. The road meanders and has a clear beginning and end. The high street becomes a destination rather than a through Road.

The new buildings link the hinter-laying housing neighbourhoods to the high street. Sometimes as ‘portal buildings’. These hold functions that are relevant to the houses as well as the high street:

nurseries, after-school-clubs, crafts clubs, welcoming groups and home-schooling hubs. In the high street there can be shops and workshops run by local dressmakers, bakers, re-useables, green building consultants, storytellers, joiners, gardeners and perhaps aquaponic vegetables. There could be a doctor’s surgery and small offices for tech companies, banks, lawyers and architects. The latter can be start-ups, or satellite offices of larger firms. The offices might attract local youth as apprentices that they might not have come across in large towers. The lack of large offices means people won’t fall into ‘group think’, which happens if too many similar people work together. The offices can sponsor or adopt smaller start-ups and shops. Not only the cars and the bicycles share the surface, but the office resources can be shared too.

All new buildings have roofs on their gardens and all existing flat roofs have received green space in order to improve the air quality. All green can also be edible to create an urban orchard.

The top floors of the large office towers can be converted to housing and perhaps the local hotel can also sponsor a hostel for the homeless. Clients in restaurants can pay for extra meals so people who have a hard time finding food will be looked after. Not only the cars and the bicycles share the surface, but the people share space and produce.

Many people enjoyed their new-found communities during lockdown and were glad they didn’t have to commute. The proposal for the new Stratford high street is perhaps idealistic but offers no radical new ideas, rather a subtle reordering of roads and buildings, greenery, cars and bicycles in order to tackle the issues of poverty, climate change and homelessness. The high street, where from the beginning of time everyone in the community came together can be a new start.

6/ The Green Heart of Stratford

By Alcina Lo, part I at Andreas Lechthaler Architecture 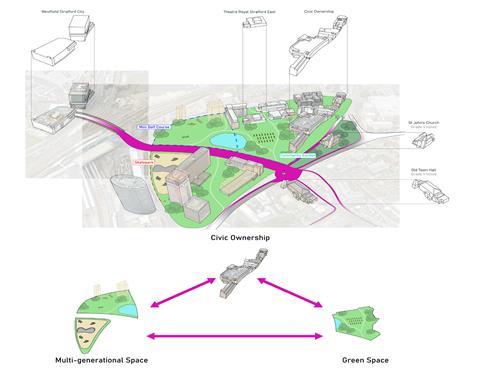 The design proposes that only one mall is needed in the town, rather than creating a competition between Stratford Centre and Westfield Shopping Centre.

The Green Heart extends the existing green space from the Queen Elizabeth Olympic Park into Stratford Town centre, creating a pedestrian link of public green space. The Stratford Centre mall currently acts as a traffic island and barrier in which residents need to pass through to access public transport, which closes in the evening, hence is not truly public space. The proposal will provide better accessibility for residents living in the South of Stratford to the transport hub and the rest of Stratford, divided by the rail and road.

The Green Heart will link the visitors of Westfield, the Olympic Park, the residents of South Stratford and the new residential communities beyond the rail and road into a well connected town with an identifiable civic centre.

Local businesses currently in Stratford Centre will be relocated to be accessible along the fringe of the Green Heart, encouraging those passing the new open space to visit. Rather than building new residential apartments, residential developments within the Green Heart emphasises the refurbishment of existing buildings along the fringe, with the ground floor used for local businesses, reducing the carbon emissions from demolishment and new-build as well as to retain the heritage of the buildings. In addition, sustainable residential developments will fill some gaps.

The proposal retains heritage assets and listed buildings to form points of interest for visitors to the town. New green walking routes provide ease of access from the Green Heart to places of leisure such as the Theatre Royal Stratford East, which is currently only accessible from Great Eastern Road.

The Green Heart is a cathartic space where residents of Stratford regardless of background can relax. The green space differs from its urban surroundings and promotes physical health by providing space for physical activity and mental health by being in nature. The trees in the Green Heart reduce the pollutants and noise in from bordering transports, creating an enjoyable calm space. Generations are also integrated into the same space by different activities to cultivate multi-generational community spirit, such as a skatepark for the existing skating subculture, a community garden for those living in apartments or enjoy gardening and mini golf as a family activity, all connected by a central path and lake.

The civic ownership of the Green Heart from local businesses, users of the community garden, skaters and users of the golf course provide passive surveillance through community activity, ensuring the safety of those passing through Green Heart throughout the day.

Overall, the Green Heart of Stratford aims to integrate existing residents with new ones through multi-generational social spaces, civic ownership and shared public space, a struggling commercial space is replaced by a new civic heart, which the people of Stratford can be proud of.