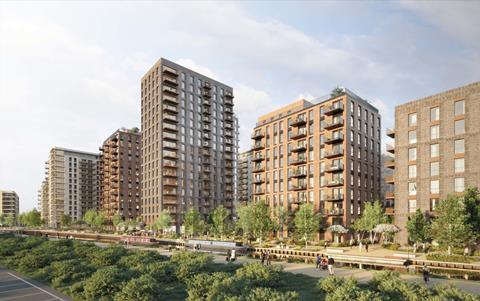 Sheppard Robson has secured planning for the second phase of its Grand Union masterplan for former industrial land in north-west London.

The scheme will deliver 524 new homes at the junction of the River Brent and the Grand Union Canal at Northfields Industrial Estate, near Stonebridge Park.

Sheppard Robson said the scheme’s interlocking L-shaped blocks would “help to promote views and permeability throughout the site” and create more open space.

The proposals also feature a sequence of new public squares, affordable workspace, a health centre and a café designed to provide a lively frontage to the canal.

Designed for St George West London, the scheme will feature a mix of tenures, with 37% categorised as “affordable”.

Sheppard Robson partner Alan Shingler said the practice had taken its design inspiration from the industrial heritage of the Grand Union Canal, with brick detailing offering a modern interpretation of embellishment featured on canal-front Victorian warehouses.

“Richly crafted brickwork with subtle differences – such as polychromatic and corbelled brick patterns – complemented by grey and bronze metalwork on balconies, railings and window frames, reflect the craftmanship and care evident in pre-war brick façades,” he said

Construction of the phase is due to start next year, with practical completion expected in 2025. The wider regeneration project covered by the masterplan is set to deliver more than 3,000 homes.