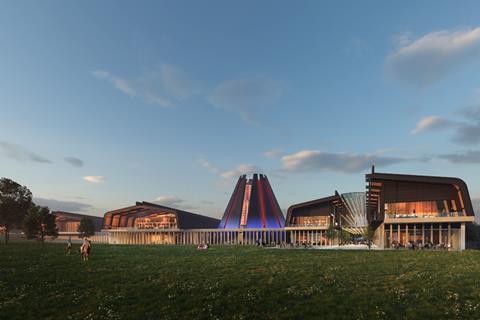 Rogers Stirk Harbour and Partners (RSHP) has unveiled designs for a huge distillery scheme in Kentucky.

Ground broke this month on whisky firm Horse Soldier Bourbon’s 227-acre site, which will include a chapel, an equestrian centre, shops and event space.

Known as Horse Soldier Farms, the development is set to be a visitor destination as well as an operating distillery.

Health and wellness facilities, restaurants and a luxury lodge will be built on the site, which will also host festivals and concerts.

In 2019 RSHP was shortlisted for the Stirling Prize for its for its Speyside distillery for Macallan in Scotland. 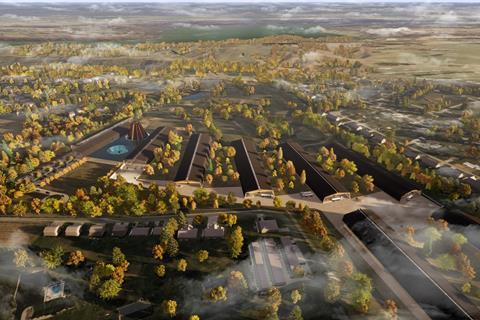 Along with the distillery, the site will include an equestrian centre, a chapel, restaurants and event space

At its heart, a large conical structure will house 12 fermentation vats, accessed via a recessed water feature.

And the scheme includes a contemplation space which pays homage to New York’s twin towers along with a gallery dedicated to the heroes of 9/11 and other everyday heroes.

Horse Soldier Bourbon was founded by chief executive John Koko and a group of soldiers from the 5th Special Forces Group who entered Afghanistan on horseback weeks after the 2001 9/11 attacks.

The patriotic spirit of the distillery and surrounding site has been inspired by their experiences, including the steel mold for the whisky’s glass bottles, which is made from steel taken from the World Trade Centre. 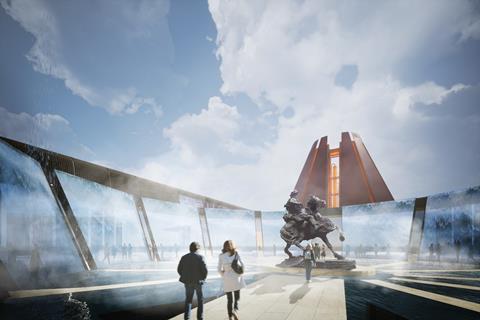