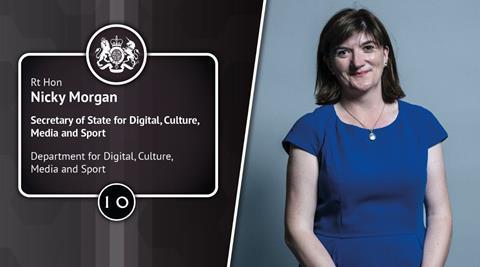 Culture secretary Nicky Morgan is to retain her cabinet position despite standing down as an MP ahead of the general election, prime minister Boris Johnson has revealed.

This means she remains in charge of approving applications for listings, although in reality those decisions are often taken by a junior minister or civil servant based on advice from Historic England.

Johnson confirmed via Twitter that Morgan would stay as the politician in charge at the Department for Digital, Culture, Media and Sport - a move that will require her to become a member of the House of Lords.

The Rt Hon Nicky Morgan @NickyMorgan01 has been confirmed as Secretary of State for Digital, Culture, Media and Sport @DCMS pic.twitter.com/d9kUbzeCAl

Morgan became culture secretary in the reshuffle that followed Johnson’s victory in the Conservative Party leadership contest in July. She had previously served as education secretary under David Cameron, in addition to other junior ministerial roles.

A remain supporter in 2016’s EU referendum, Morgan said she was “delighted to continue as secretary of state” as Johnson focused on delivering the party’s mandate in the “vital first weeks” of the new government.

“It turns out that leaving the cabinet is harder than leaving the EU,” she wrote on Twitter.

Well it turns out that leaving the Cabinet is harder than leaving the EU! Am delighted to continue as @DCMS Secretary of State as the PM focuses on delivering our mandate in the vital first weeks of this new Government