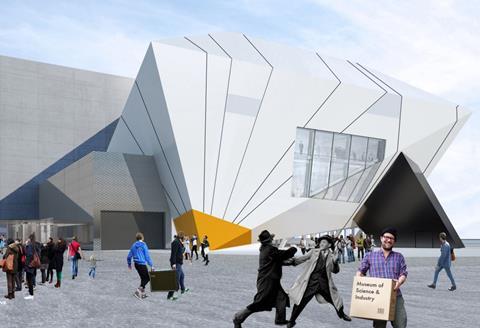 The theatre element of OMA’s The Factory scheme in Manchester.

Finance watchdogs at Manchester city council have been warned that construction-market pressures are placing a question mark over the £130.62m budget for OMA’s The Factory arts complex.

The authority last year committed an additional £19m to the project, which was first granted planning permission in 2017, after accepting that its original £110m budget had been set before any detailed site investigation or design work had taken place.

Councillors on Manchester’s resources and governance scrutiny committee have this week been told that the “complexity” of the building’s design is the project’s “most significant challenge”. They heard the unique nature of the project was acting as a deterrent to some contractors able to pick and choose more straightforward work amid Manchester’s booming construction market.

A report to councillors said lead contractor Laing O’Rourke had made good progress with the project, with the venue’s steelwork the most visible element to date. However it noted that just one-third of the contractor packages had been let so far.

The Factory by OMA

“The project team are very focused on ensuring the design is robust for each work package as the project develops and is able to react to the willingness and ability of the supply chain to undertake this complex project within an overheated Manchester construction market,” the report said.

“The project is currently going through the next quarterly review with Arts Council England. A cost and design review have also been commissioned to underpin the next phase of delivery with the Mechanical, Electrical and Plumbing being the next major work package to be let.”

Appearing before the committee on Tuesday, the city council’s director of capital programmes Jared Allen said The Factory had £4.1m in contingency funding that was currently “under pressure”.

“The Manchester market is very, very hot at the moment, so complex projects are not as appealing to the supply chain,” he said. 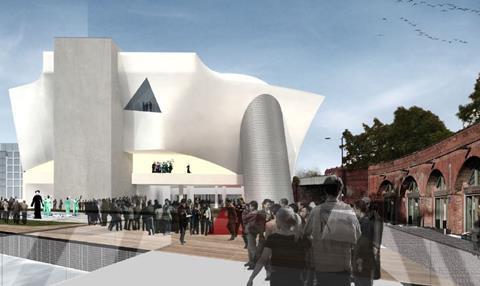 “We are finding the supply chain isn’t as deep as it was in some areas. Only 11 of the 32 packages have been let.

“We are seeing increased pressure on budget. I can’t give an absolute cast iron guarantee as those pieces are mostly not procured.”

He added: “We’ve done quite a lot of re-engineering to reduce some of the cost pressure.”

Further budget pressure has come from the discovery of new drainage issues on the site, which was formerly part of the Granada Studios complex.

Capital programmes director Allen said the drainage issue related to the previously undocumented flow of foul water and “causes a lot of delay and a lot of financial pressure”.

He said the authority had written to development partner Allied London, asking it to cover the cost of the additional groundworks.

Named in honour of Manchester’s legendary Factory Records label – home to Joy Division/New Order, Happy Mondays and others, The Factory was originally designed to include a 2,300 standing-capacity theatre and a separate 5,000-capacity warehouse space for “immersive” events. Its design was subsequently revised.

Funding for the project comes from a mix of central government cash, National Lottery allocations, and Arts Council money. Last year’s budget hike was shouldered by Manchester, which saw its contribution almost double to £40.57m.

The latest report refers to the venue being still expected to “play a significant role” in 2021’s Manchester International Festival.