The local authority building control officer tasked with checking that work on Grenfell Tower complied with Building Regulations has said his massive workload forced him to focus on other projects he believed were a higher priority.

John Hoban told the inquiry into 2017’s fire, which claimed 72 lives, that he believed he was doing as many visits to the site as he could between August 2014 and July 2016 but admitted that – with hindsight – he wished he had been given more time to scrutinise the project. 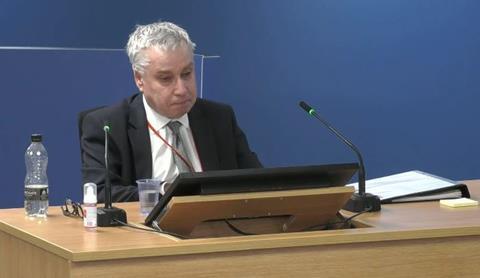 In a highly emotional end to his two days of evidence, Hoban – who quit his job as a senior building control surveyor at the Royal Borough of Kensington and Chelsea less than three months before the fire – said he was “heartbroken” for victims and their families but also criticised staffing cuts in his former department.

Thursday’s session of the Grenfell Tower Inquiry heard Hoban accept that desktop checks he carried out on some of the key products used on the refurbishment had not been as thorough as they should have been. He also accepted that assurances had been sought from the project team that steps to compliance with some aspects of the Building Regulations had been taken without those steps being checked.

Hoban told the inquiry he had looked at the British Board of Agrément certificate for the Reynobond PE 55 aluminium composite material (ACM) cladding used on the exterior of Grenfell. But he said that he may have only looked at the first of its eight pages and crucial information about the product’s fire performance was on the sixth.

Inquiry barrister Richard Millett QC asked Hoban whether he had known what the “PE” – short for polyethylene – core in Reynobond PE 55 was and what its fire performance would be. Hoban answered “no” to both questions.

Hoban agreed that he had never investigated why the project team was not using the safer fire-retardant version of the cladding, or whether the fire performance of the ACM was the same for the face-fixed and cassette versions of the product.

The inquiry also heard Hoban had a brief discussion with an engineer from Harley Facades, who had “assured” him that the cladding system had been fitted on many buildings in England and Wales that were similar in height and construction to Grenfell.

Hoban told the inquiry he had conducted a basic check on the Celotex RS5000 insulation used behind the ACM panels on the tower, which was only considered suitable for use on buildings above 18m when used as part of a cladding system that was different to the one used on Grenfell.

He accepted that it had been a “serious failing” not to look more closely at the circumstances in which RS5000 was considered suitable for use on a tall building.

The inquiry heard Hoban had not checked the suitability of a Styrofoam product and Kingspan Thermapitch TP10 panels used on the tower.

According to the Grenfell Tower Inquiry’s phase one report, the combustible ACM cladding used on the building as part of the refurbishment was the principal reason why flames spread up and around the building on 14 June 2017 – with the PE cores acting as a “source of fuel”.

The report noted that polyisocyanurate (PIR) and phenolic foam insulation boards behind the panels “contributed to the rate and extent of vertical flame spread”.

Millett asked Hoban why he didn’t focus on the materials that were being proposed for Grenfell Tower by architect Studio E and the wider project team.

Hoban said he had understood that fire consultant Exova was also working on the project. However the firm was not retained by main contractor Rydon after it was appointed to the job and had minimal ongoing input.

“I was dealing with a considerable number of projects at the time, and perhaps I didn’t spend as much time as I should have looking at the documents at that time,” he said.

Elsewhere, Hoban accepted that he had issued the completion certificate for the refurbishment based on an assurance from main contractor Rydon’s then project manager that legally required fire safety documents about the building had been supplied to project client Kensington and Chelsea Tenant Management Organisation.

He also agreed that the completion certificate should not have been issued because the refurbishment work on Grenfell meant the structure’s external walls did not adequately resist the spread of fire.

“I accept that now,” he said. “I issued that with the understanding that it did comply.”

Grenfell Tower’s refurbishment left the structure with no cavity barriers around its windows, an omission from the original plans by architect Studio E that went unchallenged by cladding contractor Harley Facades.

Hoban was asked for his thoughts on a drawing that failed to depict cavity barriers around a window.

He accepted “in hindsight” that not checking cavity barriers had been installed around the windows was a failing that fell below the standards of a reasonably competent building surveyor.

Earlier this week, cladding installation subcontractors Mark Osborne and Grahame Berry were quizzed about photographs showing cavity barriers designed for horizontal use had been installed the wrong way around and back to front. Both agreed it was “shocking” and “unacceptable” workmanship but could not explain how the errors had occurred.

Hoban was asked why he did not pick up the flawed installation of the key safety features.

“The areas I saw were fine,” he said. “They were putting the barriers in and covering up as they went, and the areas that I saw were OK.”

Hoban told Wednesday’s session of the inquiry that he had left his job at RBKC at the end of March 2017 because he no longer felt it was possible to do the role in the way that he had been trained.

He said that austerity-driven staffing cuts in his department had left him covering the work of two former colleagues and that the Grenfell refurbishment was one of 120-130 projects he was working on in 2016.

Hoban told Thursday’s hearing that he had been asked to take on a new area of work in June and July 2015, which meant he had been unable to visit Grenfell Tower during that period – even though he had originally aimed to make monthly visits.

“I think it was about 55 jobs and I felt that it was a priority to go round and look at those particular jobs to find out what stage they were at,” he said of the new patch.

Hoban said he had no major concerns about Grenfell Tower at that stage.

“There were two clerks of works on the job and there were a number of levels of supervision on site,” he said.

“There were Rydon’s own guys and then obviously the subcontractors’ foremen.

“So my main priority at that stage was obviously dealing with this new area and jobs where things were not going right.”

Hoban rejected the suggestion he had been relying on others to do his job. “I can only do so many visits in a day, in a week,” he said. “I have to look and prioritise where I need to go.”

Millett asked whether he had gone to his line manager and said: “Look, I’m overstretched. I can’t do all these jobs properly.” Hoban said he had done just that. “I did ask for help in – I think it was – April 2015,” he said. “I made a number of suggestions about what we should do. None of those suggestions were taken up.”

Hoban said he had felt unable to refuse the additional projects he was being given and that his seniors had been clearly aware of the difficulties he was going through.

He added: “I did say on a number of occasions in the office that we needed more staff. I felt that we were under-resourced.”

Hoban said he had health problems at the time but had been going in to work at weekends to try and keep on top of his work. “I used to go to bed at night with a notebook, thinking about jobs,” he said. “Some nights I wasn’t sleeping at all.”

At the end of his evidence, Hoban said he was “heartbroken” for those who had died or lost loved ones in 2017’s fire and that he wished he had been able to give more time to overseeing the refurbishment.

He went on to criticise “ambiguous and confusing” Building Regulations Approved Documents and RBKC for losing 10 experienced surveyors from its building control department between 2013 and 2017 and replacing them with a lone graduate.

“I don’t believe that’ s the correct way to run a department,” he said. “If we had a regulatory body like we had with the Greater London Council, and the regulations and Building Acts and constructional byelaws and a support network of experts that administered the regulations at that time, I don’t think we’d be where we are now.”