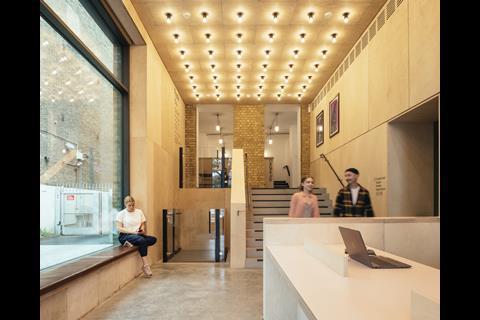 Reception area leading up to the members’ hub 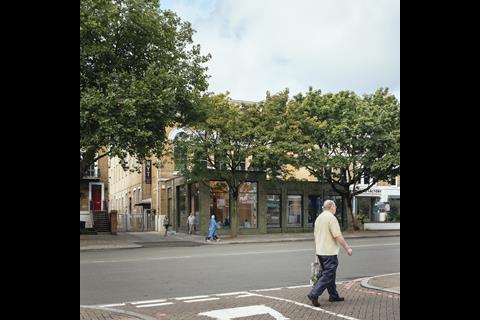 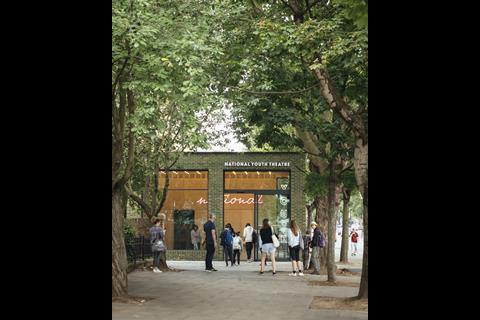 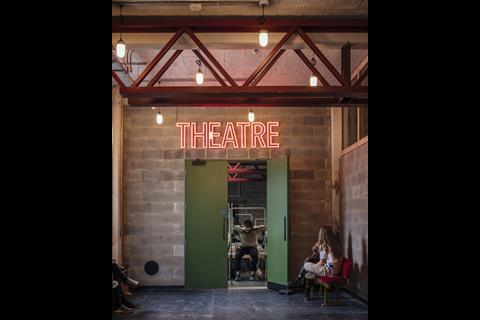 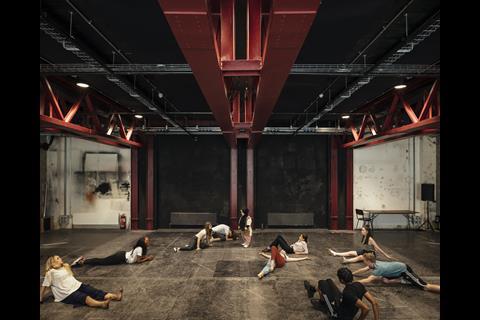 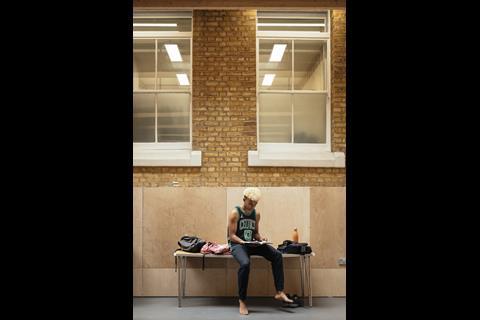 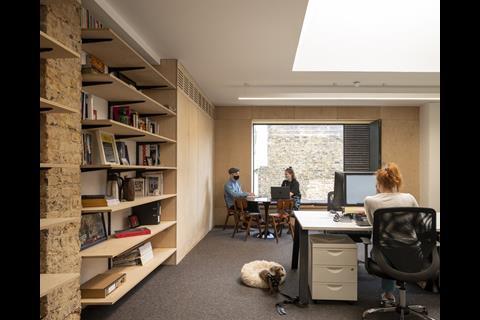 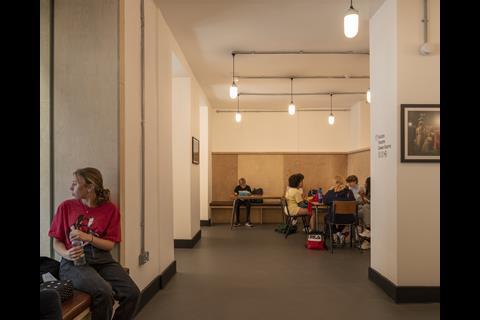 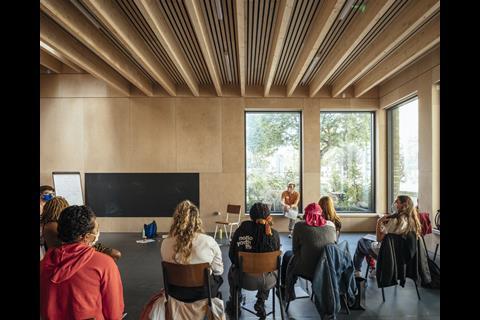 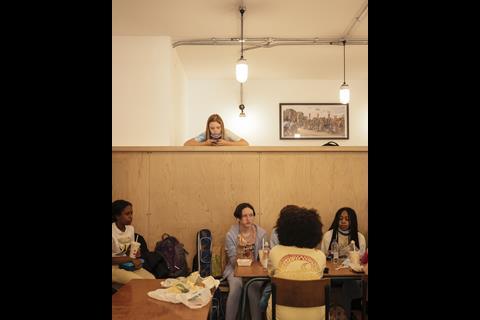 DSDHA has completed the redevelopment of the National Youth Theatre’s home on Holloway Road in north London.

The project transforms the building’s visibility and accessibility from the street and doubles its capacity for professional studio space.

The NYT was established in 1956 as the world’s first youth theatre company, with past members including Helen Mirren, Chiwitel Ejiofor, Zawe Ashton and Daniel Craig.

DSDHA’s project has added a 250-seat Workshop Theatre to the building for the first time, enabling the NYT to welcome audiences from the local community and beyond. Previously the building was used for the creation rather than performance of productions.

Central to the design concept – which DSDHA developed with the young people – is the introduction of a new welcoming entrance pavilion, housing a reception, members’ hub and community studio space. 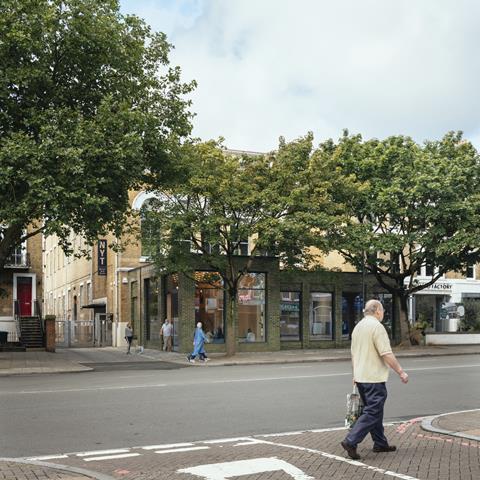 It extends across the building forecourt, replacing the car park. Extensive glazing invites visitors in, while revealing backstage and teaching activities to passers-by. The pavilion is clad in distinctive glazed bricks, a robust and low-impact material which is intended to be sympathetic to the historic façade and to capture the character of local pubs and public buildings which also act as community hubs.

On the ground floor, the relocation of staff offices and structural alterations to the existing workshops have enabled the creation of new naturally lit, flexible performance spaces, with new rehearsal studios and workshops for members and commercial hire. The redesign included acoustic separation and a digital strategy, the need for which was accelerated by the pandemic.

The upper floors of the existing building have been transformed with a new rehearsal space which opens up the first floor façade, as well as a redeveloped administrative space at the top of the building with views down Holloway Road from a dramatic new window. 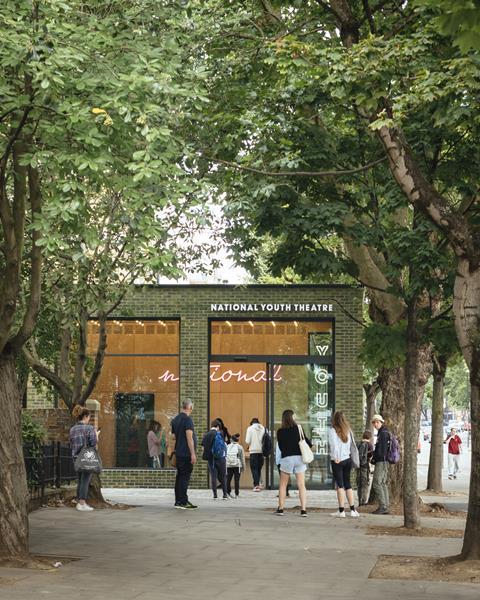 A subsequent phase of work will add a further backstage space including an interactive archive, hot desks for early-career creatives and digital recording suites. The first and second floors house further studio space as well as offices, a green room, and design and production facilities.

Practice co-founder Deborah Saunt said: “We were thrilled to win the competition to design a radical redevelopment of the National Youth Theatre’s London building, and to see it now delivered.

“We share this brilliant organisation’s commitment to making a positive impact at grassroots level, and we’re proud that our design will enable it to deliver its important work as a national creative incubator for young people in the performing arts on an even wider, more inclusive scale.” 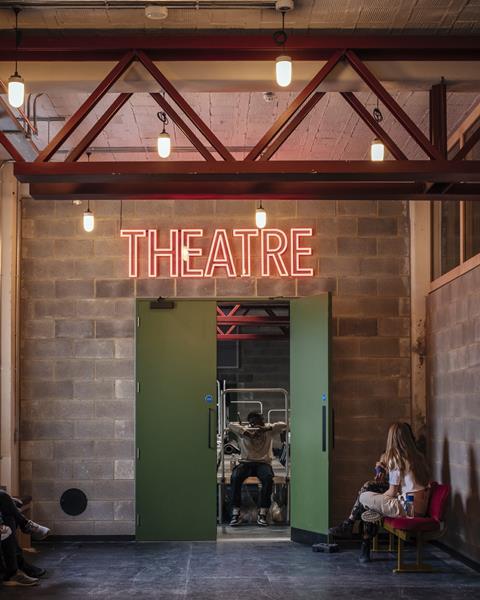