New station designed to be built in one stage 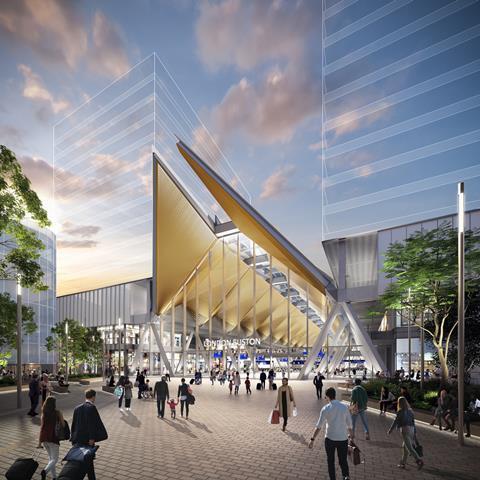 A CGI of the exterior of Grimshaw’s HS2 Euston Station, viewed from the south, showing public space outside the station entrance

HS2 Ltd has revealed images of the scaled-back design for its £1.3bn London terminus at Euston.

The new 10-platform station has been designed by Grimshaw with Arup and WSP and will be built by a Mace Dragados joint venture (MDJV).

A year ago HS2 minister Andrew Stephenson sparked anger when he sent the designers back to the drawing board to lop a platform off the scheme and increase the oversite development, following the Oakervee Review. Transport planners and architects warned it would be a false economy.

But today the minister said the simplified plans would deliver “better railways across the nation sooner than under previous plans”.

The HS2 station, which will stand immediately to the west of the existing station, will be set across three levels, with ten 450m-long subsurface platforms, which will be used by up to 17 high speed trains an hour serving the Midlands and the North.

Placing the trains below ground means more of the concourse will be accessible to non-ticket holders. It will offer a north-south pedestrian route leading from Bloomsbury in the south to Camden Town in the north, with the 300m long concourse opening on to new squares and gardens at either end.

The station hall itself – which the architects said would be 20% larger than Trafalgar Square – will become the largest station concourse in the UK. Shops and station facilities will be located on the ground and first floor, underneath a dramatic top-lit station roof.

Elements of the roof can be prefabricated off site and installed using modular construction techniques.

There will also be two east-west pedestrian routes leading across the roofs of the new and existing stations. 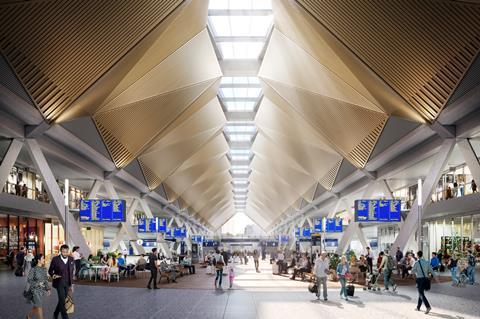 A CGI of the interior of HS2 Euston Station, designed by Grimshaw Architects. The image is looking south, showing access through the ground-level station concourse

Declan McCafferty, a partner at Grimshaw, said: “The scale of the new HS2 London Euston station means we have the opportunity to create a new truly public civic space for London, a place that responds to transport and passenger needs and becomes part of the existing urban fabric and community.

“The 300-metre long station hall sits at the heart of this approach, creating a space that is permeable, accessible and open and connects to the local streets and neighbourhoods through green, pedestrian-oriented spaces.”

Laurence Whitbourn, Euston area client director at HS2 Ltd, said the 60-acre project was one of the most complex parts of the HS2 route, given its location in a densely populated residential area and next to an existing railway.

He said: “HS2 Ltd is absolutely committed to getting Euston right, engaging with the local community and stakeholders as we continue to progress our designs.” 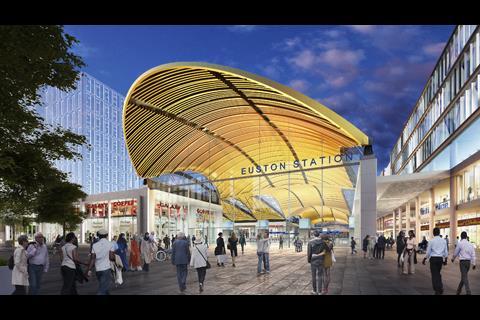 An earlier iteration of Grimshaw's Euston plans, dating from c2021 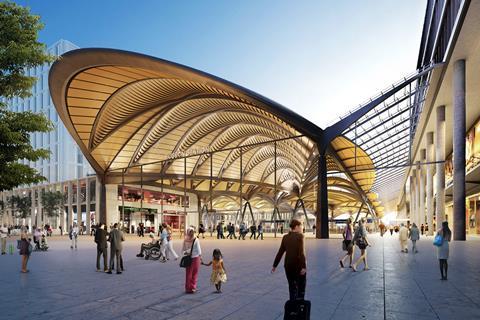 An earlier iteration of Grimshaw's Euston plans, dating from 2019 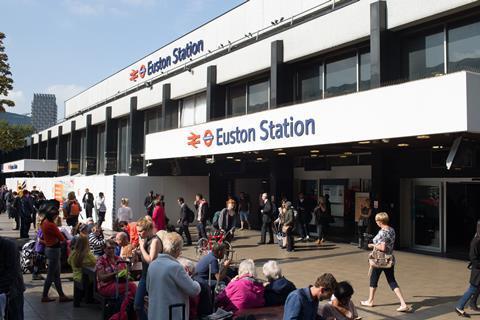 Euston station. The new HS2 station will be built to the left of the existing station