A former government official responsible for fire safety regulations has apologised for the ambiguous wording of guidance on cladding, telling the Grenfell Inquiry that it “should have been better”.

Anthony Burd, building safety lead under the Tony Blair administration, said that officials should have provided more clarity on the exact meaning of a revision to building safety guidance which created widespread confusion in the construction industry in the years leading up to the Grenfell fire.

In 2006, the government amended Approved Document B, the part of building safety regulations concerning fire safety, to state that “filler” materials within a cladding system should comply with the tough fire standard of “limited combustibility”. 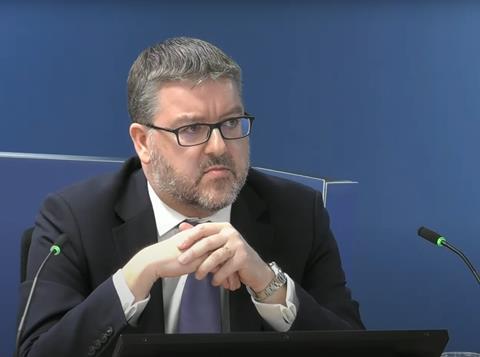 This was because the passage was written under the subheading “Insulation Materials/Products”, with the word “filler” immediately following the phrase “any insulation product”.

The inquiry has already heard that ACM panels could technically be seen to be compliant with building regulations because they were able to achieve the fire rating of ‘Class 0’, which focuses on the surface of a material.

But these types of panels, which were installed on Grenfell and were blamed for being the primary cause of the rapid spread of flame in the 2017 fire, contain a highly combustible plastic core.

Confusion over which parts of a cladding system were required to be of limited combustibility is a major factor in the cladding crisis in recent years, which current housing secretary Michael Gove is attempting to resolve partly by asking developers to pay into a £4bn fund for remediation works on buildings.

But Burd admitted at yesterday’s hearing of the inquiry that the government had not consulted the industry to ensure that the meaning of the word “filler” was accurately understood.

Asked by counsel to the inquiry Richard Millett QC why officials had not defined what the word meant in the guidance, Burd said: “With the benefit of hindsight, and while I’m sat here and why I’m sat here now, that’s a very fair observation, and where we are, we should have provided some form of description further to just the term ‘filler’.”

He added that officials had intended the word to refer to any material that “fills a void”. Answering Millett’s suggestion that the core of an ACM panel was not filling a void but was part of a composite material, he said the word was intended to capture all materials that could be used in an external wall, including cladding panels.

“Why put it in a section devoted to what is called insulation materials or products?” Millett asked.

“What I’m interested in is how you got yourself in such a muddle over this,” Millett said. “Why not just say what you meant, rather than slowly letting this gather confusion, and letting it end up in a section that, on its face, appears to be devoted to insulation?”

Burd said he “can only apologise” for the title, adding that “should have been better”.

The government has insisted that official guidance had banned the use of ACM since the 2006 revision, because the word “filler” was intended to apply to cladding panels as well as insulation.

The inquiry has already heard that Brian Martin, the official responsible for fire safety regulations at the time of the Grenfell fire, had emailed building safety experts in the days after the disaster asking them to refute a story in The Times which claimed that the regulations had permitted the use of ACM.

But the inquiry has also heard that Martin was warned in 2014, three years before the fire, by a group of cladding experts that the word “filler” was being routinely misunderstood in the industry.

Martin was alleged to have said “there is going to be a major fire” as he left the meeting, and agreed with an expert at the Building Research Establishment that a clarification of the guidance on cladding should be published on the government’s website.

But the clarification was never published, and the passage in the guidance remained unchanged until after the Grenfell fire.