Gove pledges to boost town centres, transport and skills in levelling up plan

The government has outlined 12 “missions” to level up the United Kingdom and reverse what it says is a “cycle of decline” in some disadvantaged parts of the country.

Ahead of its long-awaited levelling up white paper this afternoon, ministers made several pledges (see below for details) including improving transport connectivity, regenerating derelict sites in northern and Midlands towns and cities, rolling out devolution and boosting skills training.

The Department for Levelling Up, Housing & Communities (DLUHC) pledged to ensure that public transport connectivity across the country “will be significantly close to the standards of London” by 2030. Little detail was provided this morning, with the government saying it will include “improved services, simpler fares and integrated ticketing”. 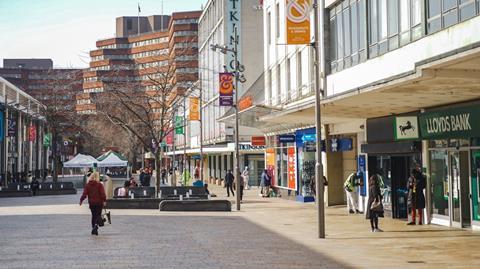 Sheffield is one of the cities set to receive funding through the government’s £1.5bn brownfield regeneration fund

DLUHC said housing grant funding will be changed, so that more cash will be funnelled into the north of England and Midlands, instead of 80% allocated to “high affordability pressure” areas as it is currently.

The paper will also confirm more detail of plans to spend £1.5bn of the £1.8bn brownfield fund for 20 places, bringing derelict sites back into use for housing and workspaces. Homes England will be “repurposed” to focus on regeneration of towns and cities.

A £1.5bn levelling up home building fund, first announced in 2020, will launch in the next few days to provide loans to small and medium-sized businesses. The paper is also expected to outline plans to build more “genuinely affordable social housing”.

A new devolution framework will be published to set out options for places in England that wish to be granted more powers. The government said that by 2030 every part of England that wants one will have a “London-style” devolution settlement.

Local skills improvement plans will be introduced with funding across England, giving local employer bodies and stakeholders a statutory role in planning skills training in their area.

Gove said: “For decades, too many communities have been overlooked and undervalued. As some areas have flourished, others have been left in a cycle of decline. The UK has been like a jet firing on only one engine.

“This white paper is about ending this historic injustice and calling time on the postcode lottery.”

However opposition MPs earlier this week criticised the announcements on housing for recycling previous funding announcements.

Lisa Nandy, shadow housing secretary, said: “I don’t think Tory MPs are going to find it very reassuring when the supposed new pot of gold contains not a penny of new money.”

The white paper is expected to be published in full at around 1pm today following prime minister’s questions in the House of Commons.

Michael Gove’s 12 missions to level up the UK

1. By 2030, pay, employment and productivity will have risen in every area of the UK, with each containing a globally competitive city, with the gap between the top performing and other areas closing.

2. By 2030, domestic public investment in research & development outside the south-east will increase by at least 40% and at least one third over the Spending Review period, with that additional government funding seeking to leverage at least twice as much private sector investment over the long term to stimulate innovation and productivity growth.

3. By 2030, local public transport connectivity across the country will be significantly closer to the standards of London, with improved services, simpler fares and integrated ticketing.

4. By 2030, the UK will have nationwide gigabit-capable broadband and 4G coverage, with 5G coverage for the majority of the population.

7. By 2030, the gap in Healthy Life Expectancy (HLE) between local areas where it is highest and lowest will have narrowed, and by 2035 HLE will rise by five years.

8. By 2030, well-being will have improved in every area of the UK, with the gap between top performing and other areas closing.

9. By 2030, pride in place, such as people’s satisfaction with their town centre and engagement in local culture and community, will have risen in every area of the UK, with the gap between the top performing and other areas closing.

10. By 2030, renters will have a secure path to ownership with the number of first-time buyers increasing in all areas; and the government’s ambition is for the number of non-decent rented homes to have fallen by 50%, with the biggest improvements in the lowest performing areas.

11. By 2030, homicide, serious violence, and neighbourhood crime will have fallen, focused on the worst-affected areas.

12. By 2030, every part of England that wants one will have a devolution deal with powers at or approaching the highest level of devolution and a simplified, long-term funding settlement.