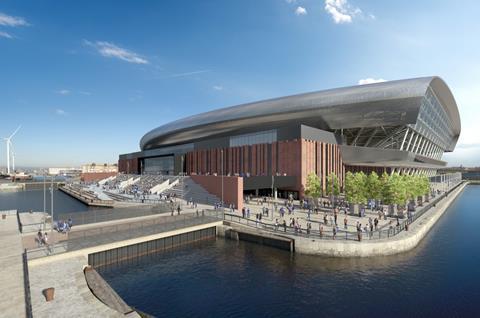 Everton has submitted an amendment to its planning application for a new 52,888-capacity stadium at Bramley-Moore Dock on Liverpool’s waterfront.

The amendment to the application comes after the Club revealed the design changes to supporters last month and addressed feedback from statutory consultees to the original planning application submitted in December 2019.

The stadium’s West Stand has been overhauled with a stepped plaza being added, a multi-storey car park removed and solar panels relocated to the stadium’s roof.

Following guidance from Liverpool council on the impact of the waterfront stadium on the surrounding docks, a World Heritage Site, the building has also been slightly reduced in height. 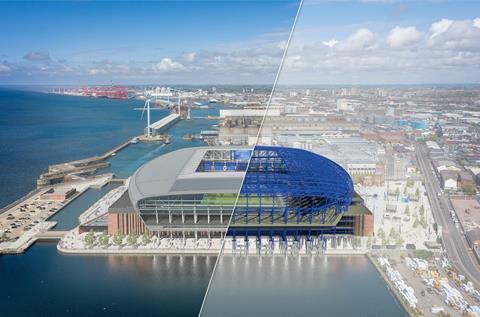 Pattern is the technical architect, while Buro Happold and Planit-IE have been retained as engineering consultants for the stadium, which has been designed by US practice Dan Meis

In a previous update to supporters, Everton’s stadium development director Colin Chong said the consultation and the sheer size of the planning application - one of the largest ever received by the local authority - meant the council may have to convene a special planning committee toward the end of the year to make a decision on the scheme.

Chong added that some third parties working on the scheme had experienced delays due to covid-19.

But he said that work on the project, which will be built by Laing O’Rourke if approved by council planning chiefs, was proceeding well despite the pandemic and he expects the project to start onsite in early 2021.

But campaigners have cast a shadow over the scheme, with Historic England, the Victorian Society and Unesco heritage body the International Council on Monuments and Sites all insisting the proposals be reviewed by the government before going ahead.

Pattern is the technical architect, while Buro Happold and Planit-IE have been retained as engineering consultants for the stadium, which has been designed by US practice Dan Meis.