Hammersmith and Fulham council has announced plans to save 80% of the cost of stabilising Hammersmith Bridge by replacing a £30m Pell Frischmann scheme with a cheaper one by Mott MacDonald.

The move is set to cut £24m from the next stage of works to permanently stabilise the grade II-listed bridge, which was temporarily reopened to pedestrians, cyclists and river traffic last month.

A decision on a proposal by Foster & Partners for the bridge’s full restoration is expected next month.

The 19th-century crossing was closed to road traffic in April 2019 when a structural integrity review revealed seven decades of unchecked corrosion. 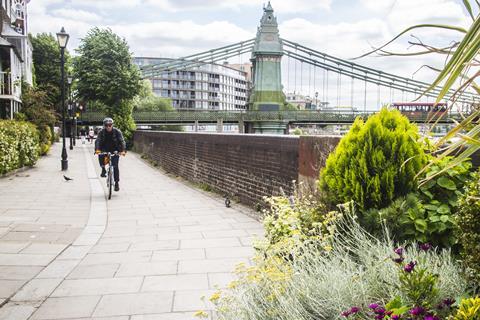 The bridge, viewed here from the Hammersmith towpath, was temporarily opened to pedestrians, cyclists and river traffic last month

It was then closed to pedestrians, cyclists and river traffic on public safety grounds in August last year after it was found to be at risk of a catastrophic collapse.

The bridge then fell victim to a political tug-of-love between the Labour-run council, local MPs and neighbouring councils, the mayor of London, TfL and central government, with no one wanting to pick up the bill and everyone blaming each other.

The Pell Frischmann proposals would have seen an external frame constructed which would remove the load on the pedestals until they were strengthened.

But Denton said this approach, which would also require driving piles through parts of the bridge, had been developed before in-depth studies of the pedestals had been carried out.

He added: “Given the uncertainties about the pedestals at the time the concept was first developed, it is entirely understandable why such an approach was initially taken.”

The Mott MacDonald plan will see the bridge’s bearings replaced by jacking using the pedestals themselves, which will be strengthened beforehand.

It will also involve the use of elastomeric bearings which allow pressure to be applied equally to all four corners while protecting the bridge’s 134-year-old cast iron structure.

Denton said this approach, which has been given the thumbs up by Historic England, would have a lower impact on historic features.

The council expects the bridge to remain open for pedestrians and cyclists for the “vast majority” of the works, which it said will be completed in under a year.

Council leader Stephen Cowan has given authorisation for the job to progress immediately, saying the local authority does not want to “lose a single day” in fixing the bridge.

He added: “While putting the safety of the public first, we believe that the importance of maintaining pace and progress, the real savings achieved by the deployment of the preferred stabilisation works option and the current vulnerability of Hammersmith Bridge demands rapid action.”

Last month’s temporary reopening was ordered after a Mott MacDonald report found that the safety risk was “acceptably low” following the installation of a temperature control system to prevent further cracking on the bridge’s anchor chains.

Acoustic sensors have also been installed to issue alerts on further crack movements.

But the report warned that these measures were only intended to be a temporary fix and the bridge would need to close again unless a permanent solution was found. 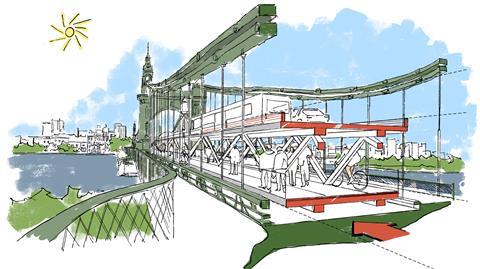 Denton is now weighing up two options to fully restore the bridge to allow it to reopen to vehicles, one by Transport for London with Pell Frischmann and a £100m plan by Foster & Partners with bridge engineers Cowi.

The latter would see a temporary truss over the existing decking, allowing road traffic to cross the river while sections of the bridge are removed and taken downstream by barge to be repaired offsite.

Denton is due to deliver his report on these two options in late September.