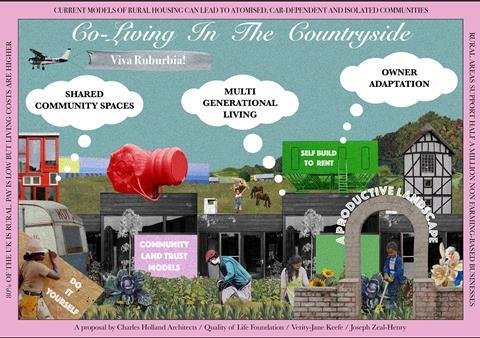 The prize – which has co-living as its theme this year – was set up in memory of Alan Davidson, founder of architectural visualisers Hayes Davidson and aims to reward transformative architecture of the home.

The inaugural trophy and £10,000 prize was won by a multidisciplinary team led by Haptic Architects last year with their response to the “future ways of working” brief. Entrants to the 2022 competition were asked to work up ideas on co-living as a design solution.

Charles Holland Architects’ proposal, created in conjunction with the Quality of Life Foundation, Verity-Jane Keefe, and Joseph Zeal-Henry, is titled Co-Living in the Countryside. It seeks to reinvigorate rural communities with a new type of shared communal housing that is focused on wellbeing and less reliant on car ownership. It also aims to address issues including affordability and loneliness.

The team said the idea was to address the lack of support and guidance available for people interested in pursuing communal living by sharing skills and targeting the transformation of empty office and commercial spaces into an “interconnected campus of physical space and online networks”. 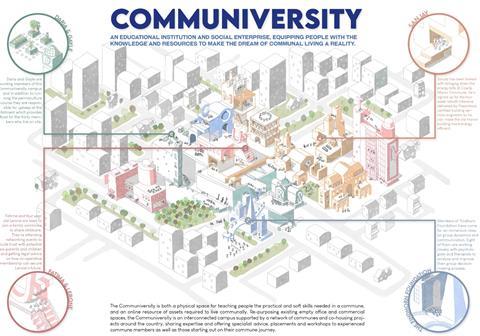 NOOMA Studio’s entry was created with Gankôgui, London Early Years Foundation, and Centric Lab under the team name of Child-Hood. The design concept, dubbed It Takes a Village, is for an urban community that fuses inclusive family co-living anchored by affordable childcare.

The project takes domestic functions out of isolation to offer better-quality spaces and more social interaction.

The jury panel for the prize includes Paul Monaghan, Mary Duggan, Agnieszka Glowacka of Haptic Architects, and Manijeh Verghese of the Architectural Association and Unscene Architecture. 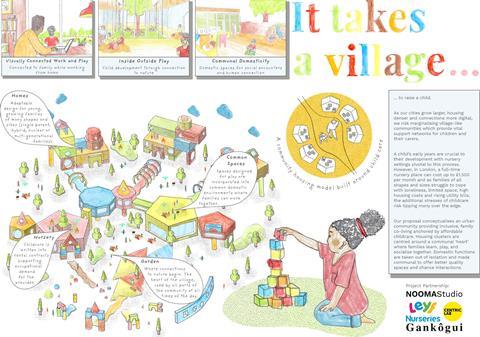 Verghese, who was co-curator of the British pavilion at the 2021 Venice Biennale, said each of the three shortlisted entries communicated a strong, innovative concept in a compelling way along with a clear direction for potential roll-out.

“The Davidson Prize is unique in the platform it creates to develop new ideas around the home, encourage interdisciplinary collaboration and celebrate the role of architects as communicators,” she said.

“I am really enjoying being part of the process with such a wealth of innovative ideas about co-living to learn from.

“The proposals from the three finalists showcase the breadth of ideas presented spanning the urban and the rural, from grassroots initiatives to new institutional models. 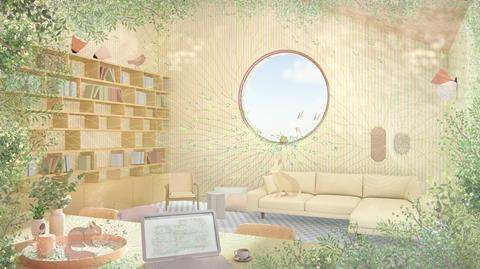 “It will be exciting to see how these three concepts will be brought to life in the next stage as they each reveal how the home can be transformed into a collective and collaborative space in the future.”

Each of the shortlisted teams will receive £5,000 to develop their design ideas and present a two-minute presentation to the panel.

An overall winner will be announced in June as part of the London Festival of Architecture and will be awarded a £10,000 prize.