Proposals given thumbs up by GLA yesterday 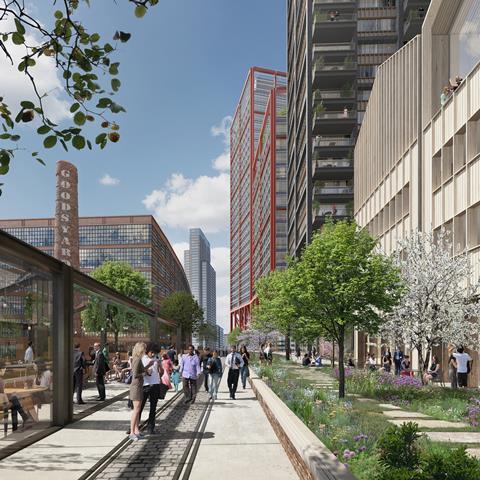 Campaigners are up in arms that Bishopsgate Goodsyard has been suggested for approval by the Greater London Authority.

Artist and Just Space member Lucinda Rogers told Building Design that the 500-home proposals for a site bordering the City of London and Shoreditch are “fundamentally wrong”.

She said the mixed-use proposals, which include a 142m tower, will overshadow and “completely dominate the area” if given the final sign off by London mayor Sadiq Khan at a planning committee next Thursday.

The scheme, masterplanned by Faulkner Browns and featuring elements designed by Eric Parry, Buckley Grey Yeoman, Chris Dyson and Spacehub, has had a troubled planning history.

First lodged for planning six years ago with PLP at the helm, it has stirred up significant controversy and was called in by Boris Johnson in 2015 when he was mayor.

The developers, Ballymore and Hammerson, pulled that version of the scheme when GLA planners said they could not recommend it for mayoral approval.

It was taken back to the drawing board, Eric Parry replaced PLP whose residential towers were scrapped and the developers submitted a revised planning application for a mixed-use scheme in July 2019.

Hackney council had prepared alternative proposals which would have seen a more low-rise development built on the 10-acre site which has been largely vacant aside from temporary uses since the mid-1960s. “Instead we have to put with this 2014 monster which has been sort of tweaked but is fundamentally wrong,” said Rogers.

She added that campaigners were questioning whether the office elements included in the scheme were necessary considering the huge numbers of Londoners who have been working from home during the covid-19 pandemic.

She said: “Everyone knows what’s happening with the City and offices and yet there doesn;’t seem to be any kind of joined up thinking.”

The plans include 130,000sq m of office space, an 11,000sq m hotel and 18,000sq m of retail space along with 500 homes, half of which will be affordable, and a small High Line-style park on top of restored railway arches which includes a series of connected gardens, terraces and walkways.

A letter signed by 50 businesses in Brick Lane and Bethnal Green Road has been sent to the mayor protesting that the scheme will put their businesses and the culture of the area at risk.

The letter complains that the plans will only benefit the City and that rents will rise across the whole area, damaging the value of its unique character, and stating: “We do not need another Oxford Street in the heart of multicultural Brick Lane.”

Reclaim the Goodsyard campaigner Susanna Kow said: “We cannot believe the Mayor of London can support a tired old scheme that offers more harm than local benefits. It’s a very poor response to the housing crisis and totally irresponsible in the current economic and environmental climate.”

Rogers said that it was “really not acceptable” that the proposals had stayed in the mayor’s office after being knocked back in 2015.

She said: “[Given] the contact that’s been had is between the developer and the mayor’s planners, I can’t see that they would have objected because they’ve been sort of nursing it along with the developers.”

“The GLA’s report uses the developer’s evidence throughout, while ignoring or glossing over ours, and that of the boroughs.

Reclaim the Goodsyard campaigner Jonathan Moberly added: “The GLA’s report uses the developer’s evidence throughout, while ignoring or glossing over ours, and that of the boroughs.”

A spokesperson for the Hammerson and Ballymore joint venture said: “We have listened carefully to feedback on our original proposal and after extensive consultation with the local community, Hackney and Tower Hamlets councils and the Greater London Authority, our revised plans provide for a balanced, mixed-use scheme whilst significantly reducing the height and density of buildings across the site.”

Housing secretary Robert Jenrick has a “holding direction” on the proposals allowing him to overrule the mayor if he chooses.