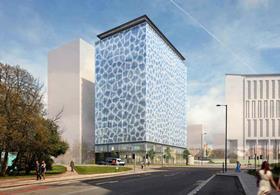 AHR has been named as the architect on the multi-million-pound Chester Northgate regeneration scheme.

The firm – which designed the new headquarters for the Royal College of Physicians in Liverpool (pictured) and ranked equal 10th in the list of top UK architects published by BD’s sister title Building last year – will join a number of advisors working with Cheshire West and Chester Council to develop the £60m initial phase of the project.

Chester Northgate is part of the One City Plan 2012-2027, which has identified more than 30 large scale projects.

Nearly £200m is being invested in schemes including One City Place, King Charles Tower Green and Chester Bus Interchange.

Dominic Manfredi, director at AHR and a local resident, said the development would “reinforce the leisure and culture offering at the heart of the transformation of the city delivering a new relocated dynamic and modern market, six-screen cinema, host of new restaurants and public square”.

Building work on the initial phase is set to start early 2020.