Contractor to carry out remedial work after using different insulation 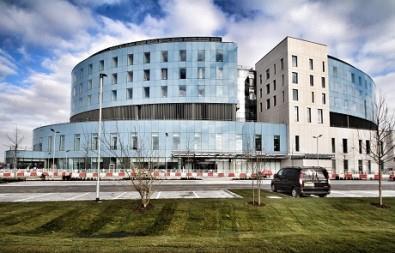 HOK’s £165m Papworth hospital job has suffered a major setback after it was found that insulation fitted to the building did not meet contractual specifications.

The new Royal Papworth Hospital was due to be handed over this month but is now expected to be delayed by several months.

The Royal Papworth Hospital NHS Trust announced the delay to the opening of its new hospital on the Cambridge Biomedical Campus in a statement on its website.

The statement said: “The hospital’s construction partner, Skanska, was due to hand over the building to the Trust in July. This would allow the Trust two months to train staff and complete its equipping programme before opening the new building to patients in September.

“In recent weeks, both Skanska and an independent tester have been checking the building to ensure it meets the specifications set out in the original contract.

“During this period, Skanska informed the Trust that they have used insulation materials that do not meet our original requirements in the lower part of the hospital building.”

The Trust said Royal Papworth Hospital’s board of directors had taken the decision not to accept handover of the building “until Skanska has completed remedial work in accordance with the trust’s original requirements. This will cause a delay to the opening of the hospital”.

The trust said it was waiting to hear from Skanska with regards to how long remedial work would take, but early indications suggested it would take a number of months.

Stephen Posey, chief executive of the trust, said: “We are extremely disappointed that we will not be able to open our new hospital in September as planned. Our staff have been working extremely hard to prepare for the move, and it is incredibly frustrating to discover a problem with the building at this late stage. However, we must ensure that our new building meets our original requirements.

“We do not underestimate the impact that this news will have on our staff. Providing clear information and support to them will be a priority for us over the coming weeks. In the months ahead, we will continue to focus on providing high quality services to our patients on our current site. We remain committed to the vision of the new hospital and the benefits it will bring to our staff and patients for many years to come.”

A spokesperson from Skanska said: “The Royal Papworth Hospital NHS Foundation Trust has announced a delay to the opening of its new hospital on the Cambridge Biomedical Campus.

“We remain in discussions with the Trust on this matter and we are working towards a resolution in order for the hospital to open as soon as possible.

“We share the Trust’s aim to uphold the highest standards for patients and staff.”

The trust had been in negotiations with a buyer to sell the site of its current hospital. It said while there would need to be some renegotiation with the potential purchaser it did not expect the new timings to have a significant impact on the sale.