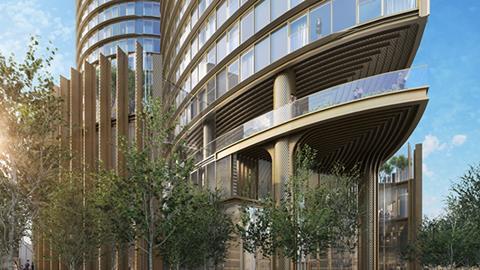 A problem job in the Middle East, falling market confidence after Brexit and the weakness of the pound all helped widen losses at the international arm of HOK last year.

It added: “The company’s financial performance in 2016 was adversely impacted by one Middle Eastern project and market sentiment post Brexit and… losses in foreign exchange.”

HOK, which recently recruited Heatherwick Studio project leader Andrew McMullan as a vice president at its London office, said income from its architecture business reamained flat at £17.5m up but interiors, consulting and planning revenue all went down with planning income nosediving 112%. “The decrease in turnover in planning came from the Middle Eastern project on which it was considered there was sufficient uncertainty [at the year end] to recognise income.”

Workloads in the UK, where the firm is carrying out work to revamp the Old Bailey and is also behind a 67-storey tower in Canary Wharf called the London Spire (pictured above), dropped by 20% to £8.6m. During the year, the firm completed work on the Francis Crick Institute in north London.