Foster & Partners has won a design competition to create a new office block in Sydney’s Circular Quay area, at the edge of the city’s central business district.

Developer Lendlease said the tower would be up to 263m in height and could be the city’s tallest office block. It added that planning permission for the structure would be sought later this year.

Gerard Evenden, head of studio and senior executive partner at Foster’s, said the tower would make a distinctive contribution to Sydney’s skyline with its innovative façade, which features a series of external cross-braces derived from structural stress diagrams.

“We wanted Circular Quay Tower and its surroundings to be of its place, taking advantage of its topography and unique location near Sydney Harbour,” he said.

“The tower will be the centrepiece of an urban regeneration precinct that will reshape the northern end of the CBD into a vibrant community contributing to Sydney’s status as a global city.”

He added that the tower would feature innovative workspaces that supported tenants ranging from start-ups to large firms.

Lendlease is working with Ping An Real Estate and Mitsubishi Estate Asia as development partners on the scheme. 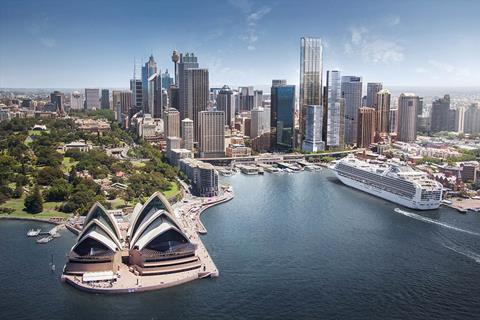 Circle Quay Tower, earmarked for a regeneration area on the edge of Sydney’s central business district