Dispatches from the frontline of regeneration 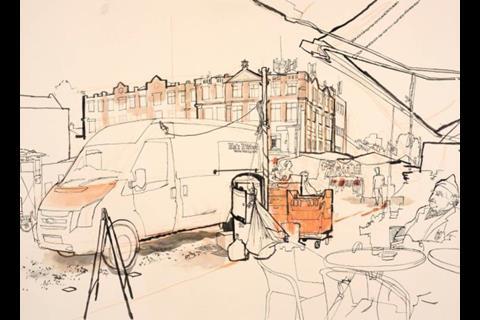 View from Almond Lane coffee house, which is part of Lucinda Rogers' exhibition On Gentrification 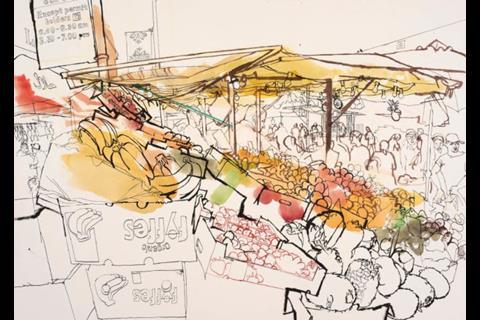 Fruit mountain at the entrance to Ridley Road, from Lucinda Rogers' exhibition On Gentrification 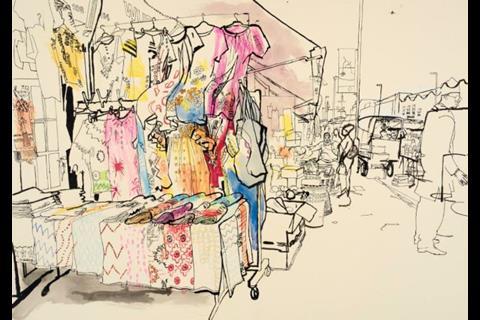 Outside Ka-sh fabric shop in Dalston, from Lucinda Rogers' exhibition On Gentrification 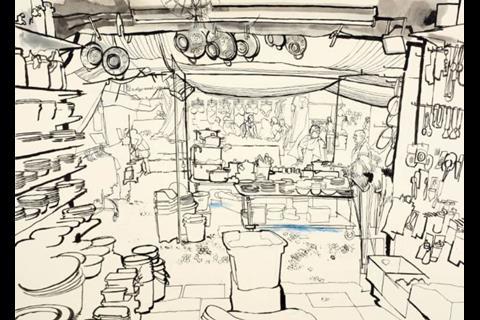 View from the kitchen shop, from Lucinda Rogers' exhibition On Gentrification 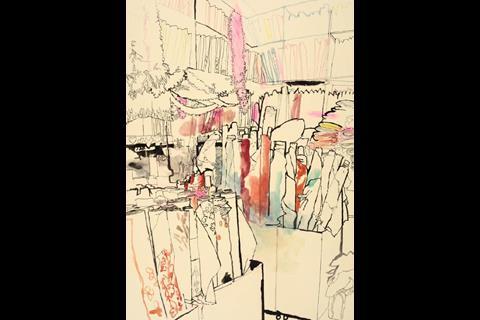 Dalston Mill Fabrics, which is part of Lucinda Rogers' exhibition On Gentrification 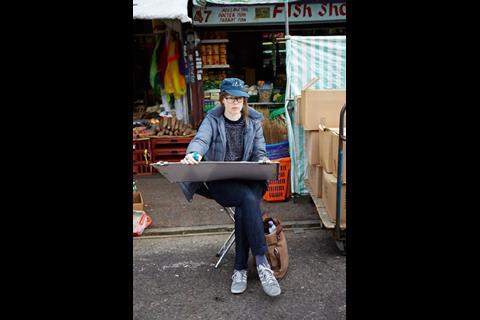 A regular constitutional around London’s King’s Cross area is rarely a disappointment to anyone with an interest in architecture – even if things have changed a tad since Ian Nairn prescribed a pause for reflection in the shadows of its Victorian gasholders five decades ago.

In addition to checking out progress with the King’s Cross Quarter, and inspecting the Crick Institute, a visit over the coming weeks also affords the opportunity to see Lucinda Rogers’ current exhibition at the House of Illustration gallery in Granary Square.

Rogers is an illustrator-reporter with a particular interest in regeneration, and her latest show – On Gentrification – packs a room with images of day-to-day life in Dalston’s Ridley Road Market, against the backdrop of rocketing developer interest in the neighbourhood’s “potential”.

People and culture are the main focus of her show, but the built environment is ever-present and precisely drawn, whether it is the Victorian structures of Ridley Road, or newer additions to the local streetscene – such as Jestico & Whiles’ FiftySevenEast luxury tower or the more distant towers of Stratford and the City. 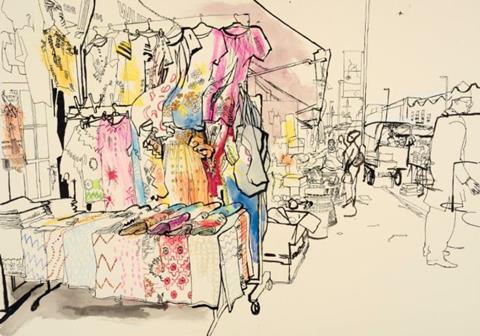 Outside Ka-sh fabric shop in Dalston, from Lucinda Rogers’ exhibition On Gentrification

Also ever-present is the sense that the people who make today’s Ridley Road what it is, have a fight on their hands to remain part of the area’s future.

Rogers spent months documenting life on Ridley Road, and in the process exploring the tension between local communities and property developers driving up land value.

“My drawings are about recording things that happen around the edges of everyday life and how our surroundings are changing,” she says.

“They are observations on a particular day, what I saw and discovered, my feelings about the market and its surroundings. What I choose to leave out or leave in makes the picture.”

House of Illustration director Colin McKenzie said the show – the fourth the gallery has commissioned – underscored illustration’s “wonderful tradition of bold social commentary” by focusing on one of the most pressing issues currently affecting the capital.

The exhibition also features a small section with examples of Rogers’ earlier work, including workplace studies from Somerset and London, and campaign work.

On Gentrification runs until March 25. The gallery is open from 10am-6pm. Adult tickets are £7.50.