The Office Group’s first new-build project will be London’s tallest timber office building when it completes next year. And as for the reduction in embodied carbon compared with concrete – well, the numbers speak for themselves. Thomas Lane reports 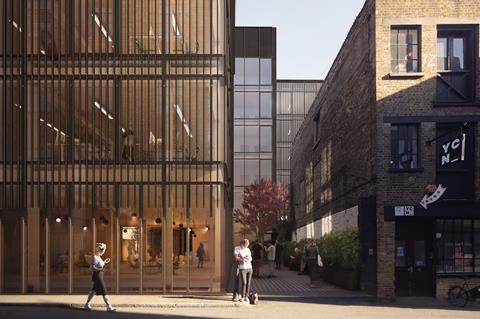 For anyone thinking of building a low-carbon office, there is a dilemma to resolve. Timber is a good choice for a structural frame due to its lower embodied carbon; better than steel or concrete. But wood is not as strong as traditional materials, so the structural members need to be bigger, eating into valuable lettable space.

This is particularly undesirable in high-value areas like central London. And there are negative perceptions about fire performance, although this is less problematic than for residential buildings as different rules apply. These issues have not deterred co-working and flexible office space specialist The Office Group from going for a timber-framed office for its first new-build project, however.

It appointed specialist timber architect Waugh Thistleton to replace a former four-storey Office Group co-working space called the Black & White Building on Rivington Street, a narrow road fringed by former warehouses, restaurants and bars in the heart of Shoreditch. The £19.3m project, which bears the same name, makes the most of a constrained plot which is hemmed in on three sides by adjacent buildings to the west and rear and a railway line separated by a yard to the east.

The new building is a game of two halves. Its front half features a cutaway to get light into the lower floors on the west side and is five storeys high in order to avoid towering above its neighbours, while the six-storey rear section fills the width of the plot. A single-storey basement has been added to create more space.