The Sustainable Building Envelope Centre has been established to harness the building fabric to generate energy. Here is a look at its ambitions and some of the key technologies under development

How can the building envelope be better used to actively capture, store and utilise energy? And how can pioneering research in this area be developed and applied commercially as an integral part of a building system?

These are two of the big questions being tackled by the Sustainable Building Envelope Centre (SBEC), which was set up last year by Tata Steel, the Welsh government and the Low Carbon Research Institute (LCRI), an organisation led by the Welsh School of Architecture at Cardiff University with involvement from five other Welsh universities.

Construction of the SBEC facility was funded by Tata Steel and is based at its Shotton works in north Wales. The centre, designed by the Welsh School of Architecture, reuses part of a production facility and consists of three floors of offices around an area for tests and exhibitions. It works as a proving ground for emerging building envelope technologies, whose performance will be evaluated over the initial three-year programme.

“It’s about transforming the role of the building fabric. Traditionally this has played a passive role in energy conservation. We believe it will become far more active in the future, capturing energy, storing it and using it. We’re trying to functionalise the surface of the roof and walls to capture as much of the solar energy that lands on it as possible.”

The centre is developing solar thermal and photovoltaic technologies that can generate renewable energy independently, in combination or as part of integrated energy systems that incorporate boost, storage, delivery and control elements.

As well as piloting building products, the hope is to develop design methodologies and best practice guidance to enable designers and specifiers to incorporate these energy systems into their buildings.”If we can find a way to store summer heat and release it in winter, we can make a lot of buildings self-sufficient,” says Pillai.

Research includes the application of coatings to a steel roof or wall surface to superimpose functions such as solar energy absorption. Transpired solar collectors, frameless photovoltaic, phase change material and embedded pipes in a steel floor deck slab have also been tested at SBEC.

If we find a way to store summer heat for release in winter, we can make buildings self-sufficient

The challenge has been to make new technologies part of a building system, and to tackle energy storage and release, issues which the SBEC is currently working on. Meanwhile, both the TSC and frameless PV products have reached commercialisation. The TSC system will be supplied via SBEC collaborators and their extended supply chain, and the Solon frameless photovoltaic panels will be marketed as Solbond Integra. Both are due for launch this spring.

The products being tested at SBEC are steel-intensive and are being tested on a steel-framed building, although the technologies are expected to be more widely applicable throughout different building types.

SBEC’s findings will be disseminated through CPD. Given that buildings account for around 40% of all carbon emissions, the potential benefits of the SBEC work are “enormous”, according to professor Phil Jones, head of the Welsh School of Architecture and chair of the Low Carbon Research Institute.

In this country we often come up with bright ideas but don’t necessarily take them to market. The SBEC work will take basic research on new products through to manufacture and demonstrate them in practice as part of a building system — all essential for getting new technologies into the market,” he says.

“The potential for using the envelope of the building to collect energy is huge if you can integrate this function into the building design rather than have it as a bolt-on. Then the envelope can perform two tasks — both envelope and generator.”

As well as installation at the SBEC building, the plan is to test the new technologies in eight buildings including housing, offices and factories in Wales so that their use can be monitored in real life situations. This £3 million project, announced last month is being backed by £1.8 million from the European Social Fund through the Welsh government. 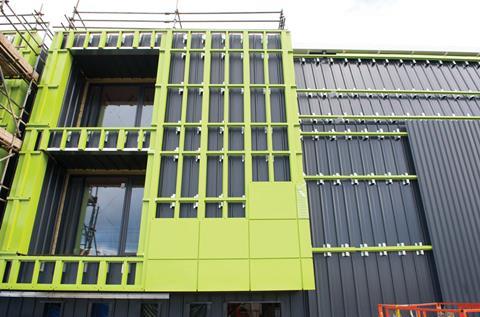 The Linden Green cassette facade system (left) was installed to part of the SBEC building to heat the offices, while the Anthracite collectors (right) feed pre-heated air into the prototyping bay.

Transpired solar collectors (TSCs) work by heating a boundary layer of air about 5mm thick on the external surface of the collector, which is fixed to a southerly eleva-tion. Negative air pressure created within the cavity by a ventilation fan draws the pre-heated boundary layer air through the micro perforations in the surface into the cavity. Fresh heated air from the cavity is then fed into the building, either directly as ventilation air or ducted into a HVAC unit as a pre-heater to the main heating system.

A TSC system can meet up to 50% of space heating require-ments. They can be installed as an additional steel skin on to both new or existing walls (metal and non-metal) to create a cavity between the wall and the metal skin.

The pre-finished Colorcoat Prisma steel (made by Tata Steel) has enhanced thermal absorption properties and absorbs the sun’s radiant energy, heating the boundary layer of air to the exposed side of the metal skin.

According to the SBEC, a TSC system, when combined with a pump, can deliver 250k@h/m2 per year and would pay for itself within three to seven years.

Two types of TSC are being trialled on the SBEC building. On the south-facing wall Anthracite trapezoidal profile collectors feed large volumes of pre-heated ventilation air into the prototyping bay, reducing the need for non-renewable heat sources.

The Linden Green solar collectors — a cassette facade system designed for commercial applications — feeds pre-heated air to the air handling unit for the office areas. This can be boosted by an air source heat pump when necessary. 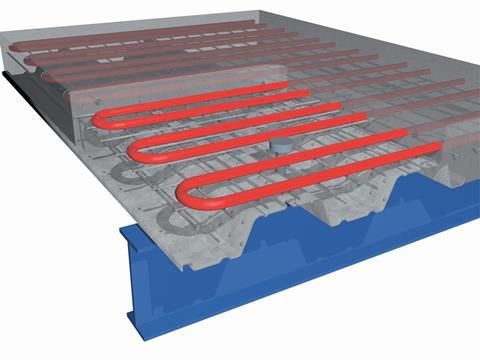 A radiant floor-deck reduces the need to heat water to high temperatures by utilising the floor area as the radiator.

Pipes embedded in the concrete/ steel floor deck enable the slab to be chilled by circulating cold water, absorbing thermal gains during the day and storing the captured heat so that it can be released at night.

For heating, water warmed by heat pumps or a transpired solar collector can heat the radiant floor slab — requiring temperatures of only 30-35°C.

At the SBEC, a radiant composite floor deck — ComFlor 60 — has been installed in the first-floor offices and is connected to the building management system to use renewable solar-heated TSC air on a sunny day and an energy-efficient heat pump on a dull day or at night time. 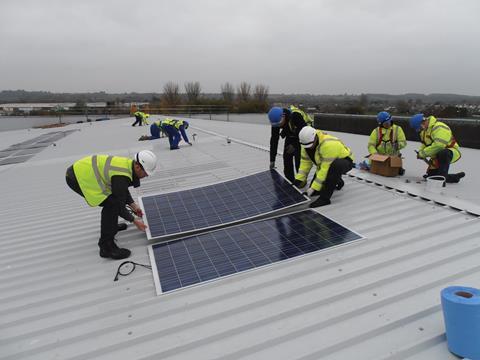 A frameless crystalline solar system was installed directly on to the Deeside Leisure Centre’s metal roof.

The Sustainable Building Envelope Centre is trialling a frameless lightweight PV system on both its own roof and that of the newly refurbished Deeside Leisure Centre.

The panels have a weight of less than 10kg/m2 and use 3.2mm transparent toughened safety glass. This uses 42 high-performance Solon Solbond crystalline PV panels covering an area of 84m2. 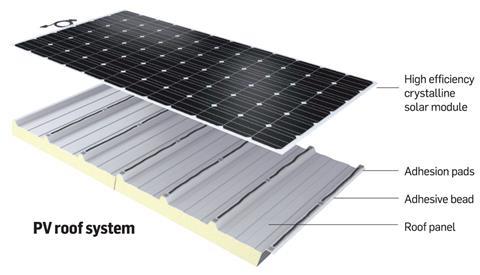 The modules are capable of producing 9.69MWh of electricity per year and are bonded directly on to the roof surface with an advanced industrial adhesive. In this way it is suitable for roofs with low static load capacity without reinforcement.

This £11 million development project is researching the application of dye-sensitised solar cell “paint” to a steel substrate to generate electricity.

The project — a partnership between Tata Steel and Dyesol — is expected to be prototyped at SBEC within the next year. The ultimate aim is to incorporate this energy-generating technology within the fabric of the building, eliminating the need for a separate element.

The project is a development of technology patented in Switzerland some years ago and arose from Tata Steel’s research into anti-weathering pigments. According to Rodney Rice, Tata Steel’s business development manager — photovoltaics, the accelerator is a series of coated and printed layers that build up the structure of a PV cell.

This active material is just 50 microns thick (each micron is one-thousandth of a millimetre). It is sandwiched between a steel base and a polymer packaging material.

“The potential benefits are that it is flexible and lightweight so would have applications on buildings that currently can’t carry the load of PV panel.

It also has implications for appearance because it is the roof rather than something bolted onto the roof, so would give freedom and flexibility,” says Rice. The product is expected to be ready for commercialisation in three to five years’ time.

In a separate project, other new coatings for steel and other substrates that can generate power are being developed in the £20 million Specific project at Baglan in south Wales.

This innovation centre, led by Swansea University with Tata Steel as the main industrial partner, aims to develop functional coated steel and glass products that will transform the roofs and walls of buildings into surfaces that will generate, store and release energy. 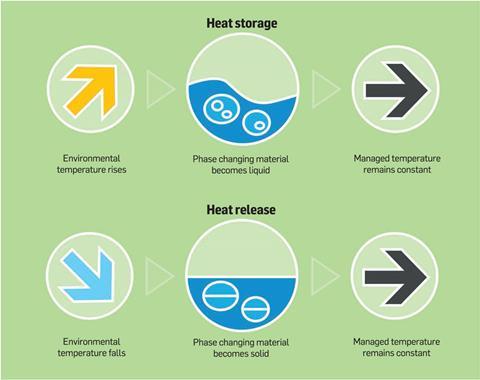 SBEC is testing the application of phase change material (PCM) as an addition to the thermal mass of the building.

The micro-encapsulated paraffin wax melts at 24°C and is incorporated into the composite floor slab. When the building is overheating, this melts and absorbs the excess heat by changing from solid to liquid. This heat is released when the temperature drops below the specified level and the liquid becomes solid again.

This can be used in floors, walls or ceilings to capture, store or buffer thermal energy and enable a constant room temperature to be maintained.

The PCM at the SBEC is above the ground floor meeting room and is a ComFlor 60 Active floor deck by Tata Steel. This takes the form of BASF’s Micronal PCM within a concrete mixture above the steel deck.