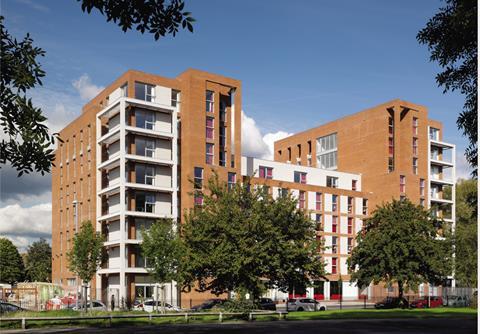 Phase one of Ducie Court viewed from Whitworth Park

Delivering student housing is highly time sensitive. Miss the start of the university autumn term and you’ve lost a year’s potential rent. So speed really was of the essence at Ducie Court, a substantial 614-unit development of student accommodation in Manchester designed by Hodder & Partners.

While a swift construction was important, at the same time client Worthington Properties was keen to deliver a building with a sense of longevity, especially given the prominence of the site opposite Manchester’s grade II listed Whitworth Art Gallery.

The result is a building designed with a steel frame for speed but with red brick cladding to give it a robust character. The first phase has been completed in time for the autumn term and is now fully occupied. 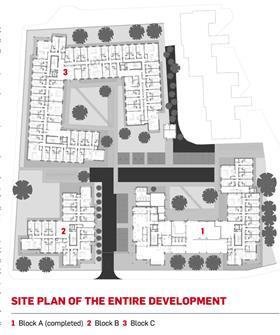 Hodder was initially asked by the then owner to convert the existing building on the site - a Victorian school turned homeless hostel - into residential accommodation to take advantage of the proximity to the university.

Feeling that it would be a huge compromise to create appropriate provision within the context of the original building, the architects instead made the case for demolition and a new build.

The site was subsequently sold to Worthington Properties, who specialise in student housing.

“We were very keen, having witnessed more recent student accommodation, to revert to a more traditional arrangement of buildings around a courtyard with the sense of community that Oxbridge precincts give:’ says Stephen Hodder, whose practice designed acclaimed new housing at the grade I listed St Catherine’s College in Oxford in 1994.

Another consideration was addressing the buildings’ relationship to the street and nearby Whitworth Park and Gallery.

“Worthington’s were very keen that it be a building of quality and permanence:’ he says, adding the programme was “incredibly tight’: This time pressure made steel (supplied by BD Structures) a natural choice, especially given that the building rises to nine storeys and is extensively glazed.

View towards the common rooms on each floor

“Speed was a big issue with very short lead times,” says Peter Ward, partner at engineer Fairhurst. “A timber frame was not an option, and concrete was too expensive:’

The architects were keen that the development should not give a monolithic definition to the street. Instead, they are creating a rhythm of three towers containing the cores along Denmark Road with lower scale L-shaped blocks of bedrooms in between, arranged in clusters of four and five bedrooms around communal living, dining and kitchen areas. To the rear is a courtyard.

Behind, on Burleigh Street, is a further block, configured to contain its own courtyard. Students enter either from Denmark Road or to the rear through the comers of these private courtyards. The ground floor also contains a general common room for the whole block plus a laundry, WCs, and offices for the block managers.

“There was a desire to think about how it engaged with the street and courtyard, and how we could create intimacy within a very large development,” says Hodder. “What could have been a really overpowering block of student accommodation is now broken down into smaller elements.”

Worthington Properties development director Russvell Worthington adds: “The courtyard feel will set it apart from other schemes being developed in Manchester, which have very high densities with 30% smaller rooms and no external space at all:’ He says Ducie Court’s comparative generosity and use of open space will give it far more sustainability.

“Ducie Court is an exciting scheme and very much a calling card for us to show what we can do as hybrid developer-contractors.”

Both the design and construction of Ducie Court were fast track, with the building designed and on-site within three months - three times faster than usual. According to Peter Ward of Fairhurst, this was only possible because the architect and engineer worked simultaneously rather than consecutively, and because of the contractor-client’s drive to be finished in time for the autumn intake.

“It was a phenomenal feat of construction by the contractor to provide a simple but quality building,” he says. 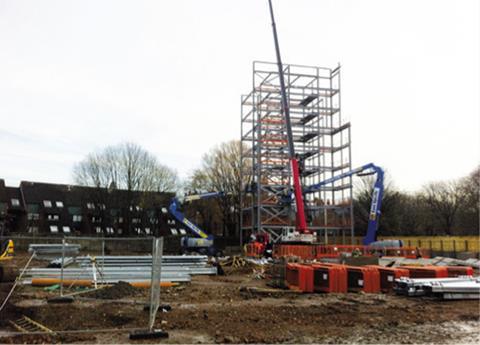 The steel frame went up in just six weeks

Time was the main challenge according to Bolton-based steelwork contractor BD Structures.

“A lead in time of just five to six weeks is very quick for the size of the project,” says BD Structures managing director Chris Heys.

“Fairhurst provided very good information to us and that helped us deliver so quickly.”

The structure is a relatively straightforward main steel frame without concrete sheer walls, fully-diagonally braced and with a composite metal deck floor. There was more complexity in reconciling the different tolerances of the steel frame and the brick skin. Apertures were pre-cut in the steel and stiffened accordingly to enable the distribution of services throughout the building.

“Most of our schemes are built in steel,” says Russell Worthington, development director of developer Worthington Properties.

“Concrete is far too slow. Steel frame is all to do with speed.” 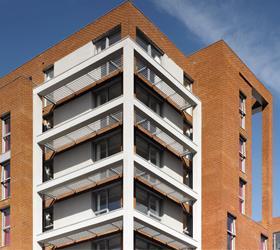 Fully glazed communal areas are positioned on the corner, with balconies expressed in white render in contrast to the brickwork

“The corners of the high-rise blocks are the giveaway that it’s a steel-framed construction,” says Hodder.

These hold the common rooms, fully glazed to make the most of the park aspect and set back 1.5m with brise soleils to mitigate solar gain.

The beams are the only part of the structure not clad in brick - here it was felt that it was more structurally honest, says Hodder, to use render, in conjunction with the brick-clad steel piers. On the upper levels of the towers are 12m-high feature columns, constructed in one piece by BD Structures, which pick up the projecting roof. These are H-shaped in section, and clad in a brick square box. 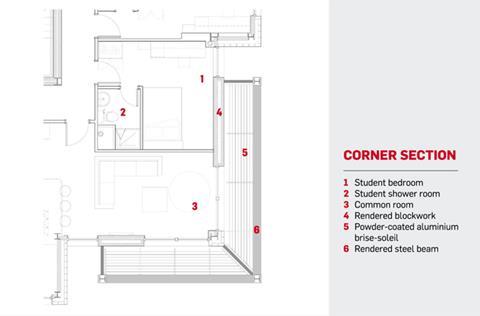