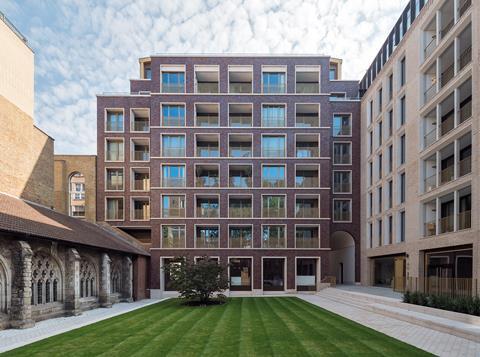 Approach the newly developed Barts Square from the south and the visitor is greeted by a shiny new all-glass office block. This barely merits a second glance given its location in London’s Square Mile, an area choked with all-glass office buildings.

Go around the office building and turn right, and the visitor will find themselves in a modest square among buildings that hark back to an era before the City became a global corporate centre. The office block steps down from 12 to 10 storeys and steps down again via an eight-storey neighbour away from the corporate City to a predominantly low-rise neighbourhood consisting of new, 19th- and 20th-century buildings.

Barts Square is a new, 3.2-acre development sandwiched between Smithfield Market, St Bartholomew’s Hospital and St Bartholomew the Great church, which was founded in 1123. Unusually for the City, it is mixed use, with 22,162m² of office space, 236 apartments occupying almost the same floor area as the offices and 1,962m² of ground-floor retail space.