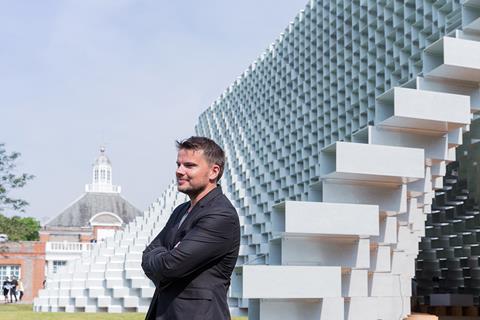 Bjarke Ingels in front of his 2016 Serpentine Pavilion

Architect Bjarke Ingels Group has jumped into the top 50 of the world’s biggest architects, according to this year’s WA100, BD’s international survey of the globe’s 100 largest firms

The US-Danish practice, which along with Thomas Heatherwork formally replaced AHMM on the £1bn Google HQ at London’s Kings Cross after the tech giant asked for AHMM’s consented scheme to be redesigned at the end of 2013, has snuck into the top 50 of this year’s list at number 49 after making its debut at position 89 last year.

BIG, which is also behind a public square at the Battersea Power Station redevelopment and whose founder Bjarke Ingels was asked to draw up plans for last year’s Serpentine Pavilion, employs 224 architects – the list is based on the number of architects employed rather than turnover – and had a fee income of between $40m and $49m.

It has three main offices – New York, Copenhagen and a London office at Finsbury Avenue in the City, close to Foster’s recently opened Bloomberg building.

US giant Gensler remains the biggest practice in the world with 2,560 architects, a decline of just 10 since last year. Turnover remains steady at $1bn–$1.5bn.

Second-placed Nikken Sekkei also retained the same position in the rankings. The Japanese practice increased the number of architects employed by 41 this year with turnover remaining at $500m- $599m.

US giant, Aecom remains in third place for the second year running although it has added 116 architects over the year taking the total number employed up to 1607. Turnover leapt from $320m-$329m to $600m- $699m. The firm is now the biggest practice for fee income for architectural services alone with an income of $596m compared to Gensler’s $559m. 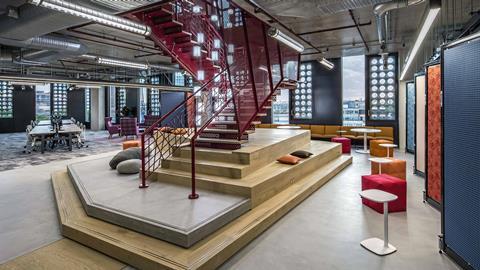 But Gensler outstripped all its rivals on interior design with fees of $450m, five times that of Aecom in second place.

Foster & Partners remains the UK’s largest practice with 642 architects and a fee income of between $180m and $189m.

The firm is one of 13 UK practices on the list with others including 100 Bishopsgate tower architect Allies & Morrison, the country’s only listed architect Aukett Swanke and the practice behind the refurbishment of Alexandra Palace in north London, Feilden Clegg Bradley Studios.

And Ken Shuttleworth’s practice Make enters the list for the first time in joint 100th place with 86 architects and a fee income of between $20m and $29m. Other new entrants include UK firm Pascall and Watson and Danish practice Schmidt Hammer Lassen.

Growth hotpots include top-placed China followed by the USA and India. Optimism about UK growth prospects remains at rock bottom with only 1% saying the UK was the country that offered the most growth potential.

But architects are more optimistic about growth prospects in Western Europe with 47% expecting business to improve compared to 28% in 2017.

BD subscribers should receive a print copy of this supplement before Christmas. It is packed with exclusive tables, features and analysis.