Bennetts Associates’ proposals would transform the building into a 21,300sq m base to be known as Edinburgh Futures Institute, operated by the University of Edinburgh.

The practice’s plans include the addition of 6,000sq m of new space, with a large subterranean area for events and lectures, a public piazza and garden areas.

Bennetts Associates director Rab Bennetts said the new institute was designed to bring together researchers from across the university with other partners to tackle major issues within the economy, education and societies across the world. 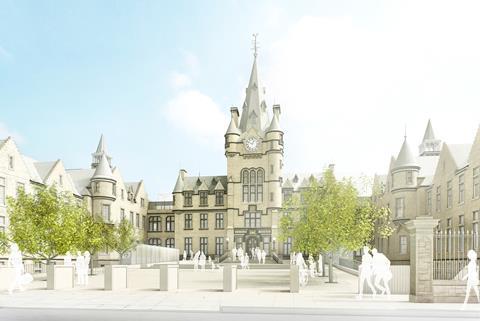 “Having worked continuously for the University of Edinburgh for 14 years we are acutely aware of the importance this project has to the institution and to the city,” he said.

“The Edinburgh Futures Institute demonstrates the university’s ambitions, not only in the world of higher education, but also in architectural patronage. We are privileged to see our ideas for new interventions so readily adopted.”

The original Royal Infirmary was designed by David Bryce from 1870-1879 and was influenced by the “pavilion” model of design, which called for each ward to be three storeys tall with large windows aimed at allowing better air circulation to combat contagion and reduce mortality rates.

Edinburgh University said the project would restore and connect ”six historically significant Nightingale wards” and make use of the building’s unusually wide corridors to create space for informal encounters and break-out areas.

While the structure boasts additions from the 19th and 20th centuries, more modern elements have already been cleared for redevelopment work.

The university said restoration and construction work for the new institute would commence next year for completion by 2021. 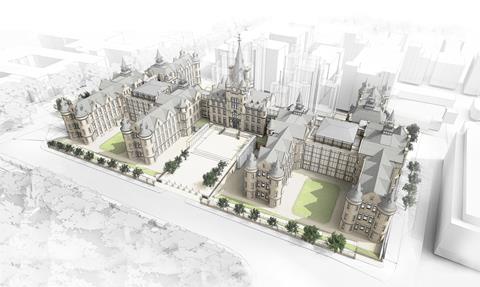