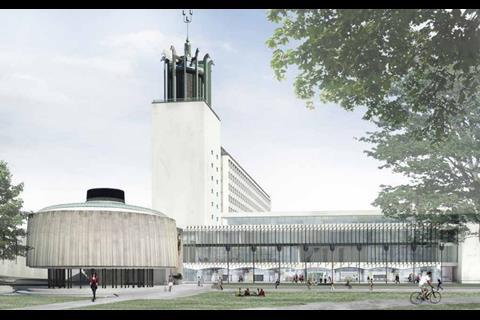 West elevation of Newcastle Civic Centre, under the refurbishment proposals drawn up by FaulknerBrowns Architects 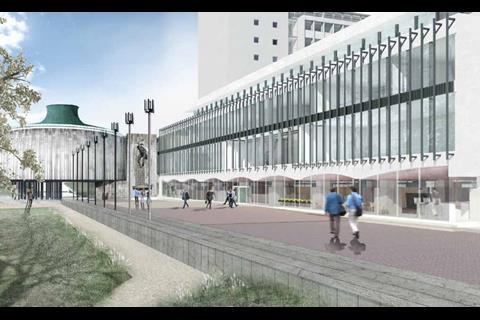 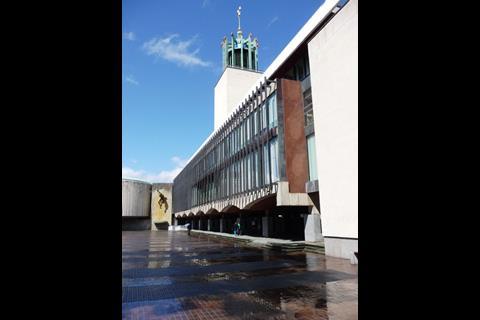 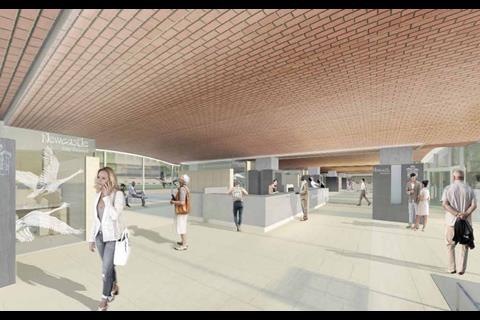 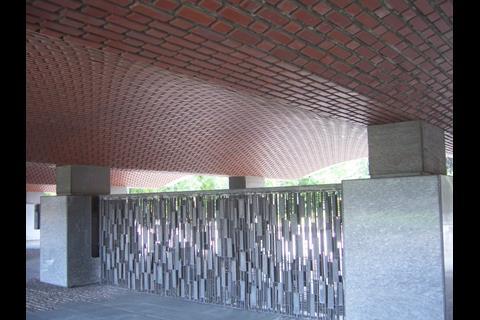 The undercroft at Newcastle Civic Centre 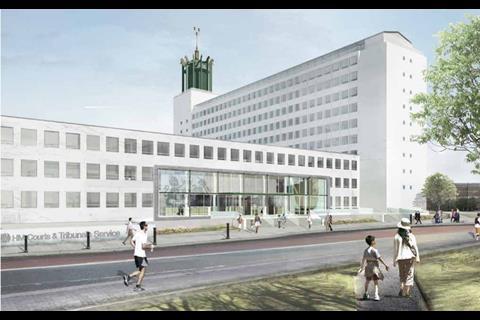 Rates Hall, at Newcastle Civic Centre, which is set to house HM Courts and Tribunal Service 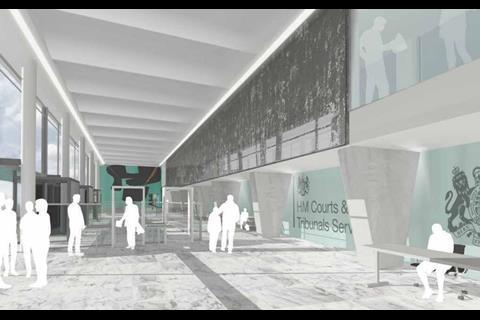 Inside Rates Hall at Newcastle Civic Centre, where HM Courts and Tribunals Service is due to relocate in 2019

Campaign group the Twentieth Century Society has issued a damning objection to the proposed refurbishment of one of Britain’s “most important pieces of post-war civic architecture”, the grade II* listed Newcastle Civic Centre.

The plans by FaulknerBrowns Architects are part of a long-term project to upgrade the centre - designed in 1950 by city architect George Kenyon and completed in 1968 - and turn it into a public-sector hub for council staff and other bodies.

Newcastle council is targeting additional income of £32m from the project over the next 25 years. But the C20 Society has taken issue with the impact some of the proposed works will have on the Nordic-influenced building, which it describes as one of the most important pieces of post-war civic architecture in the country.

The latest phase of the scheme includes enclosing a ground floor colonnade with glass to create a new entrance, meeting pods and a café, the refurbishment of upper floors, and a selection of public-realm works.

C20 Society conservation officer Clare Price said the group was “dismayed” that Newcastle council and FaulknerBrowns had not taken the same sympathetic approach to the latest phase of the scheme as they had to earlier parts.

“This is not just a convenient space to be in-filled, it forms an intrinsic part of the original design of the ceremonial approach to the civic centre,” she said.

“The significance and exceptional quality of this space has been entirely misconstrued by this application.

“This significance does not lie solely with the piers of the colonnade but is expressed in the permeability of the space, the brick planes of the undercroft, the retractable artwork screens by Charles Sansbury and the relationship of this walkway to the Ceremonial Way.

“The enclosure of this space will be hugely detrimental to the way the heritage asset is experienced on (and through) its most important elevation, and the introduction of pods, desks and other paraphernalia will contribute to blocking all views through to the central open spaces and artwork.” 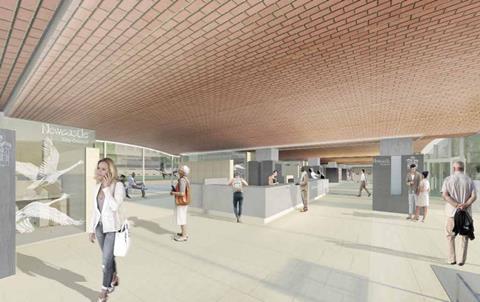 While the society said it was objecting in the “strongest possible terms” to the proposals, government heritage advisor Historic England supports the application, despite accepting that glazing-in the colonnade is a significant change.

“Fortunately the architectural approach handles this with sensitivity and creativity, emphasising as best as it can the openness of the colonnade and the order imposed by its structure,” said principal inspector of historic buildings and areas Martin Lowe.

He said the “contraction” of the council’s operations within the building created a need for a distinct public entrance, and the colonnade was the best option because it avoided using the civic centre’s main ceremonial entrance, which would “involve considerable internal change likely to detract from the grandeur of the space”.

When the application was submitted last month, FaulknerBrowns project director Nick Heyward said the scheme was “a unique opportunity” for the civic centre to continue serving the people of Newcastle and that the changes would “strengthen and enhance” the building.

“These proposals allow the civic centre to adapt to the demands of modern times, ensuring its intended use is retained and preserving the significant listed features that makes the building an icon of public services within the city and regionally across the North East,” he said.

A statement from FaulknerBrowns addressing the C20 Society’s objection to the latest proposals said the campaign group had been invited to discuss its concerns in greater detail face-to-face.

“As with any project we undertake involving buildings of historical, architectural or civic significance, we welcome engagement from the public and organisations such as the Twentieth Century Society, and their feedback is extremely valued by us,” it said.

“Our proposals for Newcastle Civic Centre were developed in response to the council’s aspiration to protect, preserve and enhance their unique heritage asset, extending its use as a civic facility and improving its environmental performance.

“The proposals have been informed by the principles set out in the Conservation Management Plan, alongside a comprehensive dialogue with the public body Historic England, who are supportive of the scheme.”

HM Courts and Tribunals Service is due to move to Newcastle Civic Centre in 2019, and arbitration service ACAS and the Insolvency Service are already occupying parts of the building. Other tenants include Northumbria Police Occupational Health and the German Consulate.