Tributes pour in for Sherban Cantacuzino 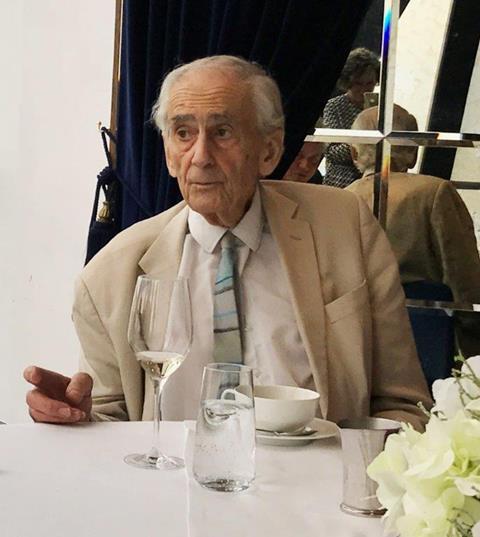 Tributes have been paid to the architect Sherban Cantacuzino who has died aged 89.

The Romanian émigré, who studied architecture at Cambridge, was secretary of Cabe predecessor the Royal Fine Arts Commission for 15 years and founder of the Pro Patrimonio Foundation, an international NGO that advocates for the preservation of Romania’s built heritage.

He was a partner in the architectural practice of Steane, Shipman and Cantacuzino – where one of his projects was to design a house for the comedian Max Bygraves – and wrote several books on architecture, including an authoritative monograph on Wells Coates.

Born in Romania, he moved to London at the age of 11 because his parents wanted him to be educated in England. The Second World War broke out shortly afterwards and he and his mother and sister settled in the UK. After the war a Communist regime took over in Romania and his father, an architect and artist and a descendant of an aristocratic family, was imprisoned. He never saw his father again, though he later returned to Romania where his interest in its history was sparked.

The urban design consultant Richard Coleman, who served as his deputy at the RFAC in the 1980s and 90s, said Cantacuzino “did more than anyone to promote the need to bring design quality into the planning system”.

BD columnist Martyn Evans, development director at Dartington Hall Estate, said: “There are people who say they care about old buildings, and people who really care. Sherban Cantacuzino was one of the latter.

“His long and illustrious career was focused on celebrating an intellectual engagement with old buildings and showing how relevant it is to modern architecture and placemaking to care about what came before.

“His great book, New Uses for Old Buildings, first published in 1975, should be required reading for all architects and particularly for developers who think that old buildings just get in the way.”

The author Gillian Darley recalled: “In November 1983 I travelled to Syria, on my own. Almost all my contacts, modest and generous people with a passion for their country, were provided by Sherban Cantacuzino. It made my visit to Aleppo and the extraordinary Roman sites further north one of the great experiences of my life.

“Through the Aga Khan awards and the AR, as well as his own family history, he was renowned internationally. Many years later he took a group, myself included, to Romania. He was over 80 but lit up at every step, every encounter, from Moldova to Bucharest, where we visited the bank designed by his architect father, a man caught between and cruelly punished by both fascist and communist regimes. ‘Hybrid modernist’ was the subtitle of the book and exhibition that Sherban launched in 2014. I think it was his proudest moment in a life which embraced more than its fair share of tragedy.”

Cantacuzino is survived by his wife, Anne, their two daughters and five grandchildren.

Richard Coleman, Citydesigner, said: “I had the great fortune to work as Sherban’s deputy at the Royal Fine Art Commission from 1984 until his retirement in 1996. He was an extremely generous man and changed my life in what he gave and opened my eyes to.

“In the spirit of Ruskin’s quote, ’the greatest thing a human soul ever does in this world is to see something and tell what it saw in a plain way’, Sherban taught me to write meaningfully.

“He did more than anyone to promote the need to bring design quality into the planning system and I am proud to have assisted him in this. He wrote extensively about it but more importantly he took every opportunity when meeting planners in the course of his work to speak to them of its importance.

“His life story is an extraordinary one and despite the distress he and his family suffered under the communist regime in his home country, strengthened every aspect of the cultural life for those who he knew and those who were affected by his work in the wider sense.

“He was spurred by the devotion to the arts by his father, an architect, painter and philanthropist – in my view the Ruskin of Romania – who remained productive in that work even though confined by the communist regime.

“As well as giving so much to the built environment of his adopted country, the UK, Sherban found time to also initiate the equivalent of the National Trust in Romania called The Pro Patrimonio Foundation.There is so much about this extraordinary man that few are aware of. I celebrate his life and hope he can watch over and inspire those continuing his legacy.”

Interview with the Romanian Cultural Centre