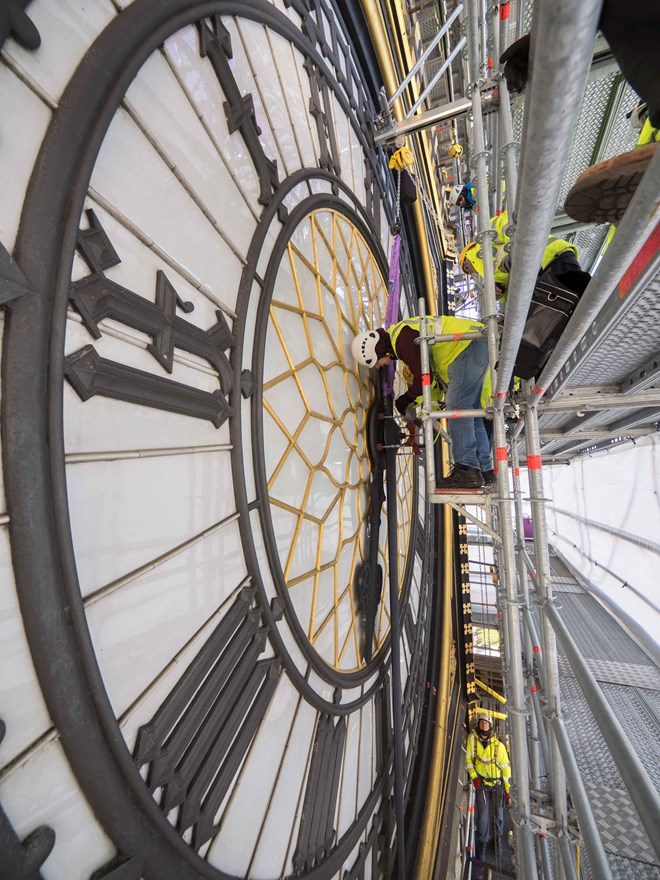 The four clock faces are being repaired in situ

The Elizabeth Tower, home to Big Ben (which, of course, is the name of the Great Bell rather than the tower itself), is one of London’s most recognisable icons and one of the ten most Instagrammed places in the world. Involvement in its £61m renovation, now into the second year, is a double-edged sword – an honour to work on such a loved building but also a big responsibility. Fortunately historic buildings specialist Purcell, the architect for the project, has plenty of experience of working on the Palace of Westminster, stretching back to 2003.

More recently, the architect has been overseeing a ten-year rolling programme of work that started in 2009 including repairing the roofs and conserving and restoring the windows. This meant Purcell was ideally placed to work on the Elizabeth Tower, a job it won a competition under a parliamentary framework agreement.

“The clock is a project we really wanted as it’s such an iconic building. We were very pleased to have got it,” beams Purcell partner Richard Putnam who reveals the practice has 50 architects working across the parliamentary estate. “The fact we are still here shows we have a good relationship with the client team.”

Completed in 1854, the 96m-high, neo-gothic tower is the work of architect Charles Barry who added a clock tower to his final designs for the Palace of Westminster reconstruction after it burnt down in 1834. Historically, the building has needed attention approximately every 30 years, with the last major refurbishment taking place in 1983–85, but this latest refurbishment is significant as it is the precursor to the wider restoration and renewal of the Palace of Westminster, which is set to start after work completes on the Elizabeth Tower in 2021.

Subscribe before January 31st to pay our lowest rate.