Here, in the start of a new series, we present the first of the nine shortlisted entries.

By Fahad Malik of Wadhal 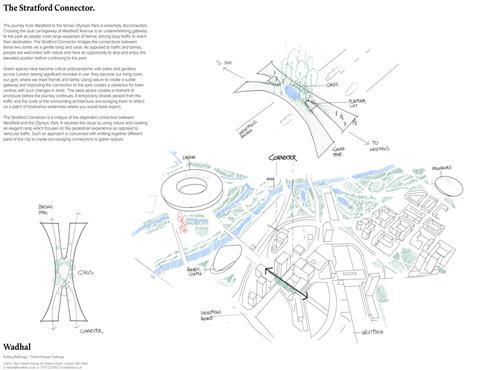 The Stratford Connector by Fahad Malik

The journey from Westfield to the former Olympic Park is extremely disconnected. Crossing the dual carriageway at Westfield Avenue is an underwhelming gateway to the park as people cross large expanses of tarmac among busy traffic to reach their destination. The Stratford Connector bridges the connections between these two zones via a gentle ramp and oasis. As opposed to traffic and tarmac, people are welcomed with nature and have an opportunity to stop and enjoy the elevated position before continuing to the park.

Green spaces have become critical post-pandemic with parks and gardens across London seeing significant increase in use- they become our living room, our gym, where we meet friends and family. Using nature to create a subtle gateway and improving the connection to the park creates a resilience for town centres with such changes in mind. The oasis above creates a moment of enclosure before the journey continues. It temporarily shields people from the traffic and the scale of the surrounding architecture, encouraging them to reflect on a patch of biodiverse wilderness where you would least expect.

The Stratford Connector is a critique of the disjointed connection between Westfield and the Olympic Park. It resolves this issue by using nature and creating an elegant ramp which focuses on the pedestrian experience as opposed to vehicular traffic. Such an approach is concerned with knitting together different parts of the city to create encouraging connections to green spaces. 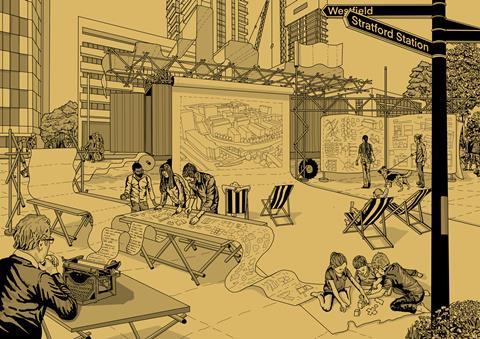 Long held systemic issues with the planning system mean people are uninformed or disenfranchised, development just happens. The system is opaque, we only have conversations with a laminated form tied to a lamp-post. Public consultation is a tick box exercise, funded and skewed by the applicant, we say we listen but we don’t. We need to respond to this new world and it starts with Stratford

Stratford shall become the testbed of a democratised local system where town planners are held accountable by the public rather than hiding behind their out of office emails. We need to start really asking people what they want rather than convincing them that our option is what they need. Bottom up rather than top down. We will create an egalitarian architecture by facilitating a dialogue between different audiences to address their social needs. Sustainability and creative re-use of existing buildings will be at the heart of our approach. A pioneering approach for a post-covid time.

We envisage a civic space of public participation, a forum for change. Funded by the council and available by all. A platform that is truly open and communicative about what is going on in the city and how people can inform it. A movable place for creating local plans and design codes, an open platform for debate. We are creating a hive of community spirit with pounds of social value where low cost and vibrancy is placed ahead of profit. We are learning from our elders and engaging with our young to benefit the future.

The Stratford planning exchange takes the form of a mobile system of demountable frames and endless rolls of canvas. We have created a kit of parts that can be deployed around the Stratford locality, highlighting certain areas or schemes that are to be discussed. We can plug on to existing buildings and give the public the feeling of a place when it is being designed. The exchange is temporary and movable or can be permanent and fixed.

The rolls and rolls of canvas are a metaphor for the endless ideas of the people which are celebrated at the exchange. The role of yellow tracing paper gives people confidence to draw and the typewriter is there to record their stories. Our stretched canvas cinema screen and story boards provide media in a variety of ways encouraging engagement and dialogue. The roof of the movable container becomes a folded ribbon communicating the latest of proposals to the city

Stratford has the chance to be a pioneer; to become a test bed for a radical change to a national problem that can provide a more liveable and lovable city.