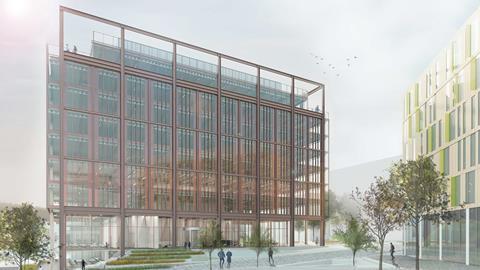 Ryder Architecture’s proposals for the first office block at Newcastle upon Tyne’s huge Science Central development have been submitted for planning.

The city-based practice was commissioned to design the structure by Legal & General Capital, which last year became a long-term investment partner for the regeneration project to transform the former Scottish & Newcastle brewery site into a science and technology hub.

Spearheaded by Newcastle City Council and Newcastle University, Science Central is targeting the creation of 4,000 jobs, 450 new homes and a range of study and research facilities on its 9.7 hectare footprint near the city centre.

The scheme’s original masterplan was drawn up by Make Architects.

Ryder is already working on a laboratory scheme for the development, but its proposals for Legal & General Capital are the project’s first stand-alone office development.

The 9,300 sq m structure features prominent steel and glass cladding, which Legal & General Capital said was a reference to the region’s steel manufacturing and shipbuilding heritage.

It said the scheme’s earthy copper tones also linked to the history of the site, which was a colliery before it became the production base for Newcastle Brown Ale.

Ryder partner Richard Wise said the submission of plans for the scheme was a “significant milestone” for the Science Central project.

“It represents the first significant tranche of private sector investment into what to date has been a predominantly publicly funded development,” he said.

Legal & General Capital said it hoped construction of the office block – the first of two it is expecting to deliver for Science Central – by January next year.