121-home scheme will be built in north London

Fourfoursixsix Architects has won planning permission for a 121-home mixed-use scheme on the site of a former Marks & Spencer store in Haringey, north London.

The development (pictured) will contain 16,000sq ft of retail space fronting Wood Green’s High Road, with apartments above set back from the street and focused around a central communal courtyard. 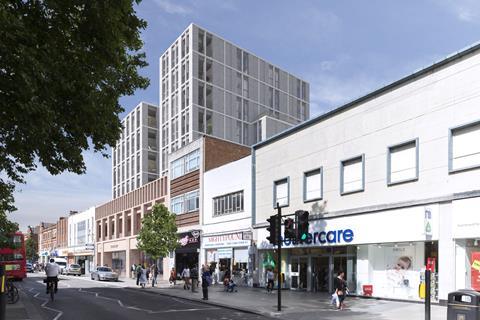 Homes will range from one-, two- and three-bed units across two nine-storey towers, to a limited number of three-storey townhouses for developer PPR Estates.

Earlier this summer Fourfoursixsix won planning for its biggest UK scheme so far, for a 280,000sq ft mixed-use scheme for Galliard Homes, on the site of a former Royal Mail sorting office at Nine Elms Parkside in central London.