Fire safety consultant Exova gave incorrect advice at key points when members of the Grenfell Tower refurbishment team were “reaching for information” on crucial details, the inquiry into 2017’s disaster has heard.

Expert witness Dr Barbara Lane said many of the queries were a consequence of Exova making no reference to Building Regulations requirements in relation to resisting the spread of fire on external walls in its fire safety strategy for the refurbishment. 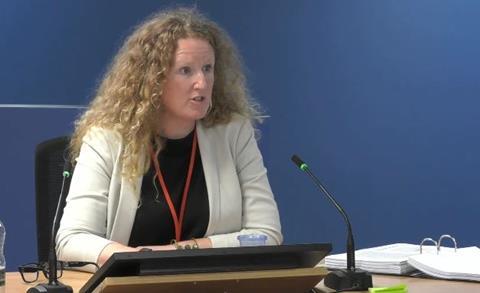 She told the inquiry into the tower block fire, which claimed 72 lives, that the questions from project architect Studio E and facades specialist Harley ought to have spurred Exova associate Terry Ashton to update his strategy or at least flag its shortcomings.

The document said the refurbishment would have “no adverse effect” in relation to fire spread but that details would be confirmed in a future update. The update was never written.

Lane also challenged Exova’s suggestion that it had been “substantially excluded” from the project when Rydon became the design-and-build main contractor in 2014.

Giving evidence for a second day, Lane – who is a director at Arup – pointed to the significance of email exchanges in September 2014 and March 2015 when project team members were asking Ashton for advice on issues that are now known to have been central to the refurbishment’s fatal flaws.

In the September 2014 chain, Daniel Anketell-Jones of Harley and Neil Crawford of Studio E sought guidance on the need for cavity barriers around windows as part of the refurbishment. They also queried the internal fire performance of the overcladding proposed for Grenfell.

Ashton responded that if the insulation set to go behind the cladding was combustible, cavity barriers would be required. Lane said the advice was incorrect.

“It doesn’t matter if the insulation is combustible or not, you are required to provide cavity barriers,” she said.

“He needed to say: ‘You need cavity barriers on the floor lines and around the windows and the top of the wall’. It doesn’t matter what insulation or anything else you’ve selected for the columns or between the areas between the columns.”

Hours later, Ashton was sent a datasheet for Celotex RS5000 insulation which was part of the NBS specification for the Grenfell refurb and would be attached to the tower’s original concrete exterior but go behind the cladding panels.

According to the email trail identified by Lane, Anketell-Jones – who was Harley’s design manager at the time of the Grenfell project – asked Ashton whether it was right that cavity barriers would not be required for use with the Celotex insulation on the grounds that it was “class 0”.

Ashton replied that not all products with a class 0 rating were non-combustible.

Lane said the exchange between Anketell-Jones, Crawford and Ashton was a “really important moment” in her opinion.

“You’ve got professionals asking really specific questions about [part] B4 [of Approved Document B of the Building Regulations], as they’re entitled to do,” she said. “They needed to hear that insulation needs to be a material of limited combustibility, which is not class 0, and they needed to hear, regardless, cavity barriers were required around the window.”

She said Ashton should have at least warned the project team that using insulation with a class 0 test certificate – as the RS5000 had – on Grenfell Tower would be a fundamental breach of the Building Regulations.

Lane told the hearing that the exchanges with Studio E and Harley should have underscored that Exova’s incomplete fire safety strategy needed to be updated with the relevant information on resisting the spread of fire over external walls, which would have assisted with the queries.

“The design team clearly need some help,” Lane said. “It’s time to do the work to give them the guidance that they need.”

Lane said at that point Ashton knew the insulation being proposed by the design team was not compliant with Building Regulations and should have known there were missing cavity barriers.

“There’s two red flags raised,” she said. “I think it’s now time to start worrying about what the external surface is, and how together the three things can comply with B4.”

Lane subsequently pointed to email exchanges between Studio E, Harley and building control officers at the Royal Borough of Kensington and Chelsea in March 2015 that showed there was still a lack of clarity between the parties about whether firestops or cavity barriers were required.

She said: “We now see entering into the narrative here a confusion about the difference between a firestop and a cavity barrier, and the need for someone who understands that fully, which is the fire safety engineer’s job, to explain what those two things are, what they’re for, and where they needed.”

The Grenfell Tower Inquiry’s phase one report found that the aluminium composite material rainscreen panels with polyethylene cores fitted to the block as part of its upgrade had acted as a source of fuel and were the principal reason flames spread so quickly around the building. It said the polyisocyanurate (PIR) and phenolic foam insulation boards behind the ACM panels contributed to the rate and extent of vertical flame spread. Celotex RS5000 was PIR insulation.

Lane’s report to the Grenfell Tower Inquiry on the quality of Exova’s advice on the project concluded that it was “entirely inadequate”. She said the most fundamental failing in relation to its fire safety strategy reports was the lack of any information on a performance standard for the building’s walls to adequately resist the spread of fire.

Lane told Wednesday’s hearing she stood by the view in her report that Exova’s failure to identify that the proposals involved overcladding Grenfell at the same time as asserting that the works would have “no adverse effect” on external fire spread was “very serious evidence of professional negligence”.

Exova’s role ‘did not end when Rydon became main contractor’

Lane also disputed Exova’s opening-statement assertions to the inquiry that its “continuing obligations” on the project ended at around the time Rydon was appointed main contractor in 2014.

She said Exova’s suggestion that it had been “substantially excluded” from the project was a “very strong” way to describe a reduced role.

Lane said the firm’s own fee proposal had suggested that it would provide advice on an ad-hoc basis as the project progressed beyond RIBA Stage E and that it had continued to answer questions from the project team and invoice for its work.

She said there was no evidence that client KCTMO had stood Exova down on the project when Rydon was appointed or of the firm’s claims its contractual obligations had effectively ended.

“I don’t understand why that is being said,” she said.

Lane added: “I see people contacting the fire safety engineer when they think they need some fire safety advice. That’s not the classification of exclusion in my mind.”

Inquiry counsel Kate Grange QC asked Lane if it was the case that Exova had continued to respond to queries from the Grenfell Tower refurbishment team after Rydon was appointed but did so inadequately. “Yes, that’s correct,” Lane replied.