A review of fire safety guidance for buildings in the years leading up to the Grenfell fire was slowed down by the government’s drive for deregulation, the inquiry into the 2017 blaze has heard.

Officials at the housing department decided to broaden the review into a wider overhaul of building regulations because the government had told them that new regulations could only be added if existing ones were removed.

The review had initially been prompted by the investigation into the 2009 Lakanal House fire in Camberwell, London, which killed six.

The investigation had concluded that the fire was caused by combustible cladding panels and the coroner, Frances Kirkham, had recommended that a passage in approved document B, the part of building regulations which deals with fire safety, should be amended. 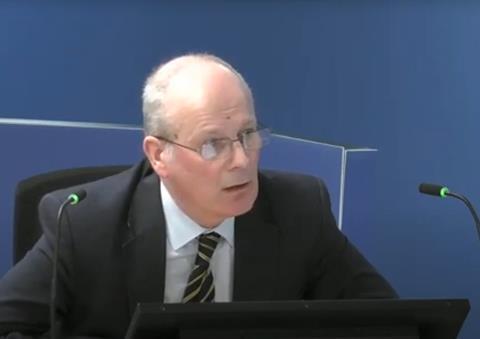 The inquiry has already heard that officials had decided to expand this initial request into a review of the entire 300-page approved document B, delaying the process by several years.

Yesterday the inquiry was told how this was again expanded in 2015 into a wider package of work on reviewing building regulations.

Fire safety official Richard Harral said in his witness statement that the decision was taken because changes to fire safety guidance risked becoming “stranded” by the need to remove more regulations than were being added.

Harral said he and his colleagues Bob Ledsome and Brian Martin had decided that expanding the review would make it “more likely that the necessary balancing deregulation could be captured”.

It meant that building regulations were still unchanged nearly eight years after the Lakanal House fire, and throughout the period that the combustible cladding panels blamed for the rapid spread of flame at Grenfell Tower were installed.

Ledsome was questioned yesterday on the decision, which he admitted was his ultimate responsibility.

Counsel to the inquiry Richard Millett QC asked if he accepted that expanding the review of approved document B would slow the process down by “some years”.

He added: “I think hindsight suggests that, that the risk of wrapping it into a broader piece of work, particularly trying to get through those first stages, is indeed a bit of a slowest ship in the convoy, that if there is a problem somewhere else, it can hold up the whole process, and I accept that that was a risk to the approach that we adopted.”

Ledsome also admitted that the approach could have “challenged” the department’s commitment made to Kirkham to amend a section of approved document B in response to the Lakanal House fire.

The inquiry also heard yesterday that a senior official had called the department’s response to the Lakanal fire “appalling” in the days after the fire at Grenfell Tower, which killed 72 people.

Simon Ridley, director general of decentralisation and growth, had compiled a briefing note for the department’s permanent secretary Melanie Dawes on communications with the all-party parliamentary group (APPG) on fire safety and rescue.

The APPG, which was chaired by the late Conservative MP David Amess, had repeatedly told the government to make an urgent response to the Lakanal fire. The inquiry saw an email from Martin to Harral in 2016 which said that the group “seem to be getting increasingly irritated at the delay in getting on with work on approved document B”.

Ridley’s note said the department’s correspondence with the APPG had been “appalling: delayed, partial and looks chaotic”.

It added that it looked as if officials had “done all but nothing” and that the “lack of urgency or reason for the delay is striking”.

Millett asked Ledsome if he agreed that the department “pursued a strategy of deflection and delay, always kicking the can down the road and taking advantage of the serial changes of minister?”

Ledsome said he did not accept that.

Millett asked: “Do you accept that there was an utter failure of engagement with the concerns that the APPG was raising?”

Ledsome replied: “I have accepted that, with hindsight, we could have offered the minister the opportunity to make a fuller response to specific comments made in the APPG letters.”