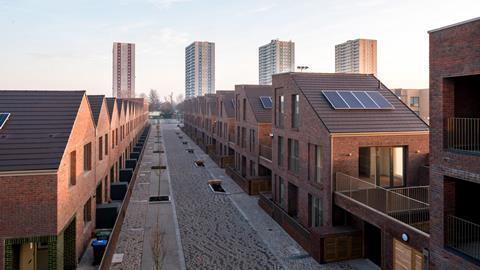 Local authorities and architects have warned that Theresa May’s Manchester promise to “fix the nation’s broken housing market” does not go far enough.

The prime minister yesterday said she was embarking on a personal mission to increase the provision of social-rented and affordable homes, and was making additional funding of £2bn available for councils and housing associations to bid for to secure delivery of the properties.

While RIBA, charities, architects and lobby group the Local Government Association welcomed the extra funding, most cautioned it would not deliver the turnaround May alluded to in proclaiming a “new generation of council houses”.

RIBA president Ben Derbyshire led reaction, underscoring the disparity between the finance on offer and the magnitude of public investment required to get housebuilding up to the levels targeted by the government’s housing white paper earlier this year.

LGA chairman Gary Porter, a Conservative peer, said what councils really needed were new powers to borrow money to fund building programmes, as well as to be able to use revenue from their existing properties to create new homes.

“The only way councils will be able to significantly deliver the new homes we need is if they are given genuine powers to invest in housing that meets the needs of communities in every town and city across the country.

“This means the ability to borrow to invest in new council housing, to keep 100% of Right to Buy receipts to replace sold homes, certainty over future rents, powers to make sure developers build approved homes in a timely fashion, and adequately funded planning departments so that they can cover the cost of processing applications.” 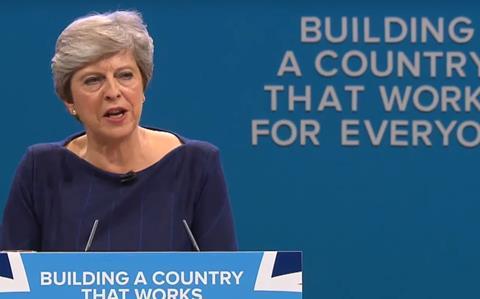 Theresa May at the Conservative Party Conference in Manchester yesterday

The LGA is calling on the government to take those steps in the Autumn Budget, and points to the nation’s annual Housing Benefit bill “of well over £20bn” as representing 80% of public investment in housing.

RIBA president Derbyshire also alluded to the potential for better use of Housing Benefit money, which he said was essentially spent “subsidising private landlords because of a shortage of social housing”.

Architects who gave their opinions to BD generally supported the call for councils to get greater powers in delivering new homes, with some pointing out that the additional £2bn in finance proposed by May would not cover the construction of a game-changing quantity of homes.

Some London authorities use a ready-reckoner of £250,000 for the provision of a small “affordable” one- or two-bedroom flat. That would turn May’s increased cashpot into 8,000 additional homes in the capital.

Karakusevic Carson partner Paul Karakusevic said the move that would assist delivery of new council housing most would be to give leading local authorities the right to invest more in their existing stock and build new affordable homes on council land.

“Councils such as Hackney, Camden, Lewisham and Enfield are starting to design and deliver their own housing but need to have their borrowing limits raised once they have developed a proven track record,” he said.

“At present the borrowing limits are in the region of £150m which is only enough for limited new build.

“If they could use their rental stream, pension fund, and land value, and borrow more based on future rental income streams they could prove to be a powerful force of direct delivery of new affordable homes.”

Karakusevic said that private-sector involvement in the development of affordable housing on public land appeared to result in a “20-25% leakage of value”, which had a massive impact on the quality and quantum of new affordable homes.

“If she really wants to support council housing then she should also be channelling funds into local authority resources: people!” she said.

“If we want this dream of ‘homes for all’ to be realised we need more champions on the ground, working for local authorities and enabling the process with the passion, commitment, skills and experience that this mission needs.

“This in turn calls for a review on the austerity measures that have left local authorities apparently crippled by lack of resource.”

PRP Architects senior partner Brendan Kilpatrick said that May’s vision of a new generation of council housing was “encouraging” but said much more substance would be required, as would developing in-house skills at councils.

“The government is the only organisation that can solve the housing crisis, and they almost need a Marshall Plan,” he said, referring to the huge aid package provided by the United States to Western Europe following the Second World War.

“Hopefully this is the start of something, but it has to be the real thing; something to open up and help supply.”

Kilpatrick said the government would need to return to its housing white paper from earlier this year and progress the ideas, as well as ensuring that councils had the human and financial resources to deliver on May’s stated ambition.

Child Graddon Lewis director Arita Morris said that while May’s additional funding was welcome, it still only took the total affordable housing pot to £9bn – less than the government’s £10bn Help to Buy fund, which aids homebuyers to pay more than they would otherwise be able to afford for new homes.

“This will, at best, enhance rather than reverse the constraints on access for households lacking substantial savings – or parental help – to meet minimum deposit requirements,” she said.

She added: “We cannot forget that we need to create places, not just buildings. Creating places where people want to live and work needs to be considered alongside other infrastructure such as transport, open spaces, education and local economies.

“Ultimately, a genuine reversal of the housing crisis can only happen if it is understood that housebuilding is not a tap that can be turned on and off, but instead requires long-term thinking, planning and funding.”