A re-focusing of Homes England towards funding conversion of existing buildings is needed to achieve government’s levelling up aim, a new report has suggested.

The report, titled No Place Left Behind, published by the Create Streets Foundation’s Commission on Prosperity and Community Placemaking, and written by former Number 10 policy advisor Toby Lloyd, also suggests policies to enable a mass transfer of empty shops and buildings to communities. 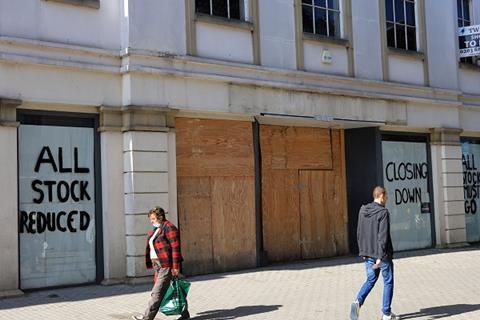 Boarded up shops in Cheltenham, Gloucestershire

In total, it makes dozens of suggestions of how the government can achieve its key aim of “levelling up” the United Kingdom (see below).

The report comes hours after the government announced the housing ministry will be renamed the Department of Levelling Up, Housing and Communities (DLUHC) and given a wider remit.

The commission’s report said converting an existing building is on average £670 cheaper (35%) per square metre than building afresh.

It said: “If Homes England’s £1.1bn development finance commitment was used to support conversion rather than new build, between 67,000 and 70,000 homes could have been created rather than 55,000.

“This is the equivalent of 5% of the government’s annual housing target with no additional government financial support.

“Important secondary benefits of more town centre living include the fact that it can be easier for older people to stay physically active for longer, can support home working requirements and reduces car-dependency for many journeys. Encouraging town centre living and systemic repurposing of many shops is the right thing to do - but it needs to be done correctly”.

Housing Secretary Robert Jenrick said earlier this year that Homes England would be “reset” to focus more on regeneration.

The report suggests new housing and better transport connections are not enough on their own to deliver on the government’s promise to spread wealth and opportunity to ‘left behind’ towns.

It suggests a new Community Right to Buy to giving communities the power to buy empty or derelict buildings, and for dedicated ‘improvement districts’ to reinvent town centres and residential neighbourhoods along with a £2bn Community Wealth Fund to support the most left behind places to develop their own solutions.

Nicholas Boys Smith, founder of Create Streets and chair of the new government Office for Place as well as the author of the Building Beautiful report, said: “If the government see levelling up as constructing fast roads linking new jobs to new housing estates sprawling through our countryside they will have missed a vital opportunity to invest in our existing communities and grow sustainably.”

No Place Left Behind: The report’s key housing proposals