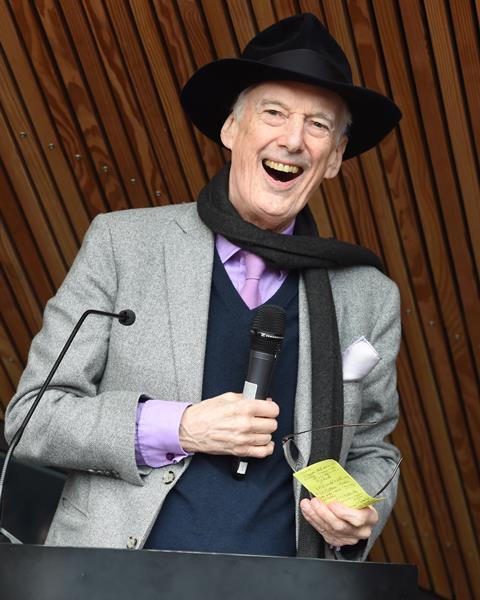 The architectural historian, landscape designer and cultural theorist died at his home in London last night.

With his late wife, Maggie Keswick, he co-founded the Maggie’s cancer care charity that has commissioned a string of world-famous architects and won the Stirling Prize.

The first Maggie’s Centre opened in Edinburgh in 1996, designed by Richard Murphy, and was shortlisted for the 1997 Stirling Prize, a trophy eventually won by Rogers Stirk Harbour & Partners for the centre at Charing Cross Hospital in Hammersmith.

There are now 24 centres across the UK and abroad, designed by the likes of Zaha Hadid, Fosters, Frank Gehry, Reiach & Hall, Steven Holl and Ted Cullinan.

Jencks’ home in Holland Park was grade I listed by Historic England in 2018 and plans are underway to convert it to a museum and archive called The Cosmic House. Bookings are due to open at the end of next year.

Jencks was best known for his interest in post-modernism and his books include The Language of Post-Modern Architecture, The Universe in the Landscape and The Architecture of Hope. He lectured at more than 40 universities around the world.

He was due to chair an event at the RIBA next month at which US-Spanish practice Ensamble Studio will receive the RIBA Charles Jencks Award. The prize was set up to honour an individual or practice which has made a major contribution internationally to both the theory and practice of architecture.

>> Also read: Charles Jencks to open his house as a museum

Maggie’s chief executive Laura Lee led the tribute to Jencks, saying: “It’s very hard to come to terms with Charles not being here as he has been such a pivotal part in developing Maggie’s vision for a different type of cancer care and turning that vision into a reality.

“Over the last 23 years his passion, drive and imagination meant that leading architects from across the world came to build these extraordinary centres; places which have benefited thousands of people with cancer both in the UK and abroad.

“I know Charles will be remembered for his many talents, but for me personally his legacy lies in the contribution he has made to ensuring people living with cancer, and those close to them, have the best possible support.

“Maggie’s would not be the organisation it is today without his tenacity, dedication and charisma. He will be sorely missed. Our thoughts are with his family.”

Very sad to hear of the death of Charles Jencks. Modern Movements in Architecture was one of the first books on Architecture I ever read and his AD issues shaped the landscape. Years later I was thrilled to edit Radical Post Modernism with him and my FAT colleagues. RIP Charles.

Holland’s FAT co-founder Sean Griffiths described him as a “huge figure in the architectual world” while Tony Fretton said he “changed architectural writing”.

Architecture writer and novelist Will Wiles said: “Terrible to have lost Charles Jencks, a wonderful writer, historian and theorist and, more practically, a man who vividly demonstrated the potential for architecture to bring peace, comfort and joy. He leaves a permanent legacy of beauty and care.”

The architectural academic Eamonn Canniffe said: “As a student it was great to read Charles Jencks as an irreverent voice in the otherwise hair-shirted world of British architectural criticism. But clearly Maggie’s Centres are his most important legacy.”

Architecture for Humanity co-founder Cameron Sinclair tweeted: “RIP to Charles Jencks, who kept a generation of architects in check and convinced some of the biggest personalities in the industry to give back to society.”