City centre development will be near station

Buckley Gray Yeoman is drawing up plans for developer First Base to build a £155m mixed-use scheme in Cambridge.

The city centre plot, currently being used as a depot by Travis Perkins, was bought for an undisclosed sum by the developer and RPMI Railpen, the investment manager for the £30bn railways pension scheme. 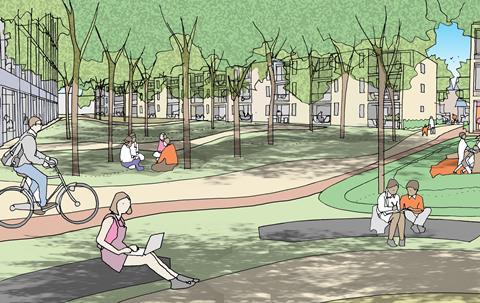 A sketch of how the scheme could look

Although finer details are being kept under wraps, the plans are said to include a 250,000sq ft neighbourhood consisting of new build-to-rent homes and work, leisure and community space.

The scheme, which will be five minutes’ walk from the city’s railway station, will also include new pedestrian and cycle routes and new public gardens.

Travis Perkins, which has cut 2,500 jobs in efforts to counter the impact of the covid-19 pandemic, plans to move its depot to new premises elsewhere in Cambridge.