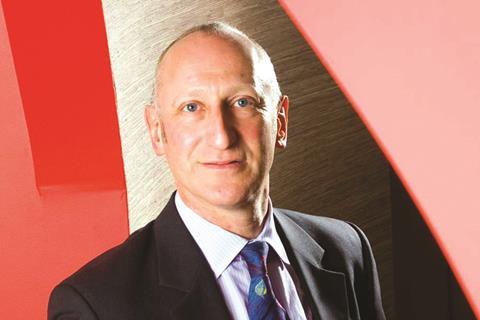 Harry Rich, the former RIBA chief executive, is to be the government’s next lobbying tsar.

Rich’s appointment as the new registrar of consultant lobbyists, a job he described as a “challenge and an important opportunity”, was confirmed yesterday. He begins at the end of this week.

The job ad, posted in April, described the post as “an important and high-profile role with both ministerial and media interest”.

Responsibilities include maintaining the government’s register of consultant lobbyists. This was introduced in response to public concern about a lack of transparency after three peers and an MP were accused of potentially breaching the rules in 2013. Lobbying firms that don’t join the register can face criminal proceedings.

Eight applications for the post of registrar were received initially but the post was re-advertised in June resulting in a further three applications. A shortlist of two men and one woman was drawn up.

Rich, who quit the RIBA in 2016 after six years and set up as a business consultant and executive coach, was named as the government’s preferred candidate earlier this month.

MPs on the Public Administration and Constitutional Affairs Committee gave the Cabinet Office a dressing down for dragging its heels over the summer, leaving little time to make an appointment before White steps down on Friday.

The committee issued a statement saying: “We… attach great importance to the appointment because of the potential controversy around lobbying. On the basis of his evidence to us, we are satisfied that Mr Rich has the personal integrity and professional experience to be appointed as the next Registrar.”

A transcript of that evidence – essentially Rich’s second job interview – has been posted Parliament’s website.

Extracts from the committee hearing:

Chair (Bernard Jenkin MP): What motivated you to apply for the role?

Mr Rich: There are probably a couple of motivations. One is that, as a matter of general principle, I think that the oversight of professions is generally in the public interest, to make sure that professions are operating in that way. That process, in my experience, strengthens the professions concerned.

David Morris MP: Good morning. You have had quite a varied career—I have just been looking at the notes. What experience do you have in particular that qualifies you to be Registrar of Consultant Lobbyists?

Mr Rich: There is a mix of things. First of all, I have run a variety of things in my time, so I understand process and systems and the way things happen. At an administrative level, I think that is a useful prerequisite.

Secondly, I have worked in and around organisations that have been involved with Government, Parliament and Ministers—not on a consultant lobbying basis, but when I was at the Design Council, for example, we were an NDPB working with the Business Department at that point. Subsequently, at the Royal Institute of British Architects, we worked with a variety of Government Departments. So I understand the way policy is made and Ministers operate and, from the outside, the way lobbyists work, to some degree. I think that is part of the qualification there.

On a more specific basis, I think that lobbying and discussions with Ministers about policy and legislation are often a very useful part of the policy formation process, but if—and only if—that is done in an open and transparent way. Smoke-filled rooms and backroom deals are unhelpful to policy making, but transparent conversations—transparent lobbying—can be very useful. The opportunity to contribute to the process that brings out that transparency is something that interested me.

David Jones MP: Mr Rich, you have said that you have no existing conflicts of interest, but as you yourself are a consultant, working for a large number of clients, how do you propose to ensure that a conflict does not arise in the future?

Mr Rich: First of all, in lots of the roles I have done, conflicts of interest or the appearance of conflicts of interest have been absolutely critical, so I am very alert to that as a general proposition. In the specific case—to answer your question—quite simply I would not take on work for any organisation or individual where there might be a potential conflict of interest. I think most cases would be utterly clear. If there was a doubt, I would err on the side of not doing it.

Kelvin Hopkins MP: As Members of Parliament we are often lobbied—often on noble causes for whatever—but it is where commercial interests are involved that we are most concerned. I am very aware of the old saying that there is no such thing as a free lunch. No doubt lobbying organisations that come under your register, if they meet you, might take you out for a free lunch.

Mr Hopkins: How would you deal with that situation?

Mr Rich: I would not take any real or apparent gifts or benefits of that kind. I don’t need a free lunch. I can go and buy my sandwiches at Pret A Manger or something. I wouldn’t be doing that. We will have friendly relationships with the industry and with others, but we can do that over a cup of coffee, which I think probably will not influence me too much.

Mr Hopkins: I have to say, if I’m in a situation where I am concerned about being lobbied, I insist on buying the coffee myself. That is a personal view. I’m a bit of an old-fashioned purist.