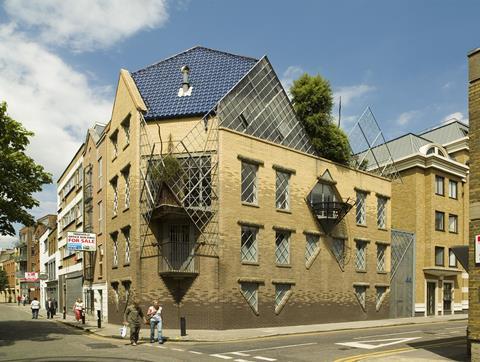 44 Britton Street in Clerkenwell by Piers Gough of CZWG, designed for Janet Street-Porter

The Clerkenwell house designed by Piers Gough of CZWG for the broadcaster Janet Street-Porter has been listed by the new heritage minister, Michael Ellis.

The post-modern town house, 44 Britton Street, which dates from 1986-88, was recommended for grade II protection by Historic England.

Street-Porter, a former head of youth at BBC2 and editor of the Independent-on-Sunday, met Gough at the AA where she also studied before ditching architecture for a career in the media.

The listing entry describes the house as an “extrovert and ostentatious example of post-modern domestic architecture”.

Its “layered elevations, whimsical features and sophisticated composition and detailing [are] a creative tour-de-force” and it has “inventive and idiosyncratic internal planning which survives well”.

“It is a highly personalised commission, reflecting the lifestyle and personality of the patron while enabling the architect strong creative expression.

The citation also calls it a key project by CZWG and an uncommon late-C20 revival of the London townhouse tradition, anticipating the repopulation of post-industrial areas of inner-London.

Street-Porter lived in the house for 15 years until she commissioned a house from David Adjaye. That relationship was not so successful and she wrote in her Independent-on-Sunday column that he was “someone I dream of regularly ritually disembowelling or forcing to go through a nasty form of torture before mopping up the storm water in my living room with his designer sweaters”.

The Britton Street project attracted national attention when she asked Islington council to move a lamppost to make way for the house.

Duncan Wilson, chief executive of Historic England, said of 44 Britton Street: “This house is an extrovert and highly individual example of post-modern domestic architecture. It is an inventive and idiosyncratic building by a leading exponent of post-modernism and reflects the personality of Janet Street-Porter who commissioned the architects and lived there.

“Post-modernism represents an important strand of late 20th-century architecture and cultural heritage and I am delighted that this significant example of the style has been recognised through listing.”

Street-Porter specified a number of practical features, such as a billiard room and a segregated office, though her primary objective, as she explained in the BBC programme ‘Building Sights’, was for the house to present an hostile exterior, discouraging unwanted visitors.

The elevations, in some sense, are conventional, following rhythmical bay divisions and echoing the proportions of the surrounding Georgian buildings, though the overlaid interlinking diamond frameworks across the façade create a wholly untraditional aesthetic, to which the materials, chosen due to happenstance and budget, contribute; free bricks were offered by a manufacturer hoping to capitalise on the eventual success of the building, and while Gough was reticent to use any of the four colours offered, Street-Porter decided all four colours, laid to recede in shade as the building rose, would create a trompe l’oeil of perpetual sunlight on the façade. Likewise, the bright blue-tiled roof was chosen due to the offer of a cheap end-of-line lot of Stirling tiles.

There is no outward-facing entrance to the building, abetting Street-Porter’s unwelcoming aspirations, as the front door is tucked away in the gated courtyard. The original nail-head doors and leaded windows lend a fortress-like quality, while other details, such as the anachronistic log lintels, are playful reflections of the owner’s tastes – Street-Porter was a keen rambler.

The angular exterior was countered in the plan form, a defining element of which was the curved courtyard wall. The layout of the floors was quite different from each other, designed for specific functions: on the ground floor the billiards room and a diminutive guest room (to discourage lengthy stays!) had angular dividing walls echoing the line of the façade.

Above, the first-floor bedroom was en-suite and had a dressing room, with a spacious bedroom enabling Street-Porter to manoeuvre her wheeled bed to produce different vistas, with the curved wall of the stair defining the space.

The third floor is the principal living area, with piano nobile-proportioned windows, and a kitchen was separated by curved walls reflecting the stair and the semi-circular balcony overlooking the street.

The roof-top office was only accessible by an external stair in order to provide a sense of leaving the house to start work.

The design, intended to be an abstract portrait of the occupant, reflected her avant garde, idiosyncratic outlook, and her desire for privacy and separation of work from home life. Street-Porter lived in the house from 1988 until 2001.