Careful detailing and complex fabrication is integral to this landmark structure

Wilkinson Eyre’s footbridge over the River Foyle in Northern Ireland is far more than a useful crossing to connect the community of Ebrington in the east - including a former British barracks - more directly with the centre of Derry-Londonderry in the west.

As its name suggests, The Peace Bridge is conceived as a landmark structure that physically and symbolically links the Catholic and Protestant communities.

As such, the architects were careful not to visually prioritise either side of the bridge, instead designing a completely symmetrical structure.

“It’s conceived as two self-anchored suspension bridges that overlap for 20m or so in the middle,” says Wilkinson Eyre associate director James Marks.

As well as responding to political issues, the bridge’s S-shape alignment relates to local site conditions by connecting to the key axial routes on either bank. It also responds to bends in the river to maximise long views in either direction.

”As you walk across the bridge, views open up in one direction and close down in the other,” says Marks. “The structure is always on the side where the long views aren’t” 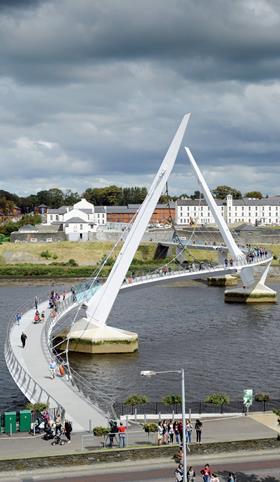 The river span accounts for 96m of a total bridge length of 312m. The bridge deck is made from weathering steel in an isotropic triangular box section, with transverse cantilever girders connected to the underside of the box web. The convex edge of the deck has a stringer beam that connects the ends of the deck cantilevers and supports the parapet system.

The deck width varies from 3.5m at the ends of the crossing to 4.5m seating areas at the pylons. The curve of the deck is accentuated by a zone of aluminium decking throughout the span.

Each inclined pylon rises 38m and rakes away from the bridge, evolving from hexagonal fabricated box sections up to a triangular pyramid at the tip. The deck is suspended from one edge by a filigree array of hanger rods spaced along the concave edge of the deck at 4.5m intervals.

The bridge opened one year ago and, says Marks, has become something of a destination in its own right, with locals enjoying spending time on benches incorporated within wind breaks
below the pylons.

The judges praised the bridge as “a fine example of careful detailing and complex fabrication- as well as a symbol of recent political and physical regeneration developments.