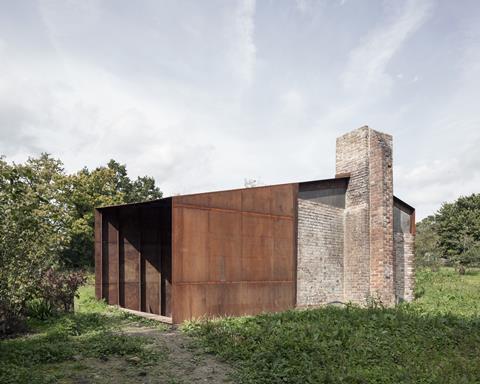 Corten steel complements the rustic quality of the existing brickwork

For obvious reasons the idea of melancholy isn’t really seen in a positive light in our modern world. But in times gone by this was not necessarily the case. “Melancholy,” said Victor Hugo, “is the pleasure of being sad.” Equally, in late 18th and early 19th-century architecture, the deep tones and brooding landscapes of the picturesque and romantic movements revelled in melancholy, seizing upon it to inject a new emotional and melodramatic charge into everything from gothic ruins to isolated follies. To put it simply, there was once a time when melancholy could be fun.

And this, at its core, is one of the concepts that drives the latest work of BD Architect of the Year Gold winner Carmody Groarke. It is arguably the practice’s most enigmatic and esoteric project to date and one that gives these age-old templates contemporary expression while retaining all the haunting seclusion of the past.

Old Bearhurst is a private house nestling amid appropriately picturesque East Sussex countryside. Two of the circular brickwork oasthouses that are so common in the region form its historic core. In 2012 these were converted and extended by Duggan Morris to create a new single-storey, oak-clad home for a property developer and his family. A crumbling adjacent farmhouse however was left untouched and it is the restoration and  conversion of this structure into a sculptor’s studio that Carmody Groarke has now completed.