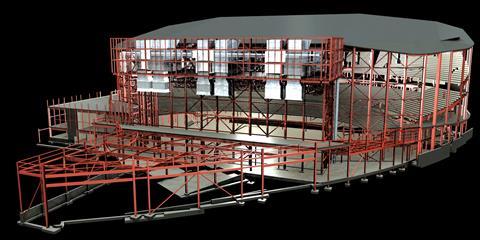 The external facade is faceted on a series of grid lines which relate to the seating bowl inside. Three tiers of seating hang off the main structure.

Leeds Arena by Populous and Arup

Leeds Arena will be the UK’s first “supertheatre”, according to its architect, Populous. Under con-struction on a tight city-centre site, the 12,300-seat venue will host both music and sports events and feature a distinctive cranked and faceted steel-framed form.

American-style sports arenas usually have in-the-round or horseshoe configurations, but the £60 million Leeds venue will be based on a traditional theatre format built on a much larger scale aided by both an enhanced acoustic performance and a massive 54m-long by 10.5m proscenium arch that supports one-third of the roof structure.

Leeds was one of the few British cities that didn’t have an arena. The council is developing the scheme to attract regeneration in the area surrounding the Claypit Lane site north of the city centre — the highest part of the city. 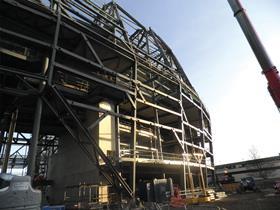 The arena contains 4,200 tonnes of steel, which enabled the team to create long-span roofs and overhangs.

The design takes advantage of the 8m drop in height across the site to allow the arena to nestle slightly, reducing its visual impact. At the rear, it is bounded by the ring road but the front will open on to a public plaza.

Externally, the facade is faceted on a series of grid lines relating to the geometry of the seating bowl within, where three tiers of seating hang off the main structure, with a row of boxes between the lower/main and upper tiers.

Around the column-free bowl are a lower concourse and catering facilities on the ground floor, and a main concourse on the second. VIP areas are on the third floor with another concourse on the fourth. In the fan-shaped arrangement, all seats face the centre of the performance area, with a longest distance to the stage of 68m compared with a standard arena’s 95-110m.

The arena’s structure contains 4,200 tonnes of steel. “A steel frame was a really good solution for this building. We have some quite long-span roofs and complicated geometries and overhangs and to have created that in another material would have been very difficult,” says Arup associate director Jim Bell, adding that nothing on the building was orthogonal.

“The building is a really nice balance between steel for the spanning and concrete as an acoustic barrier.”

At £4,800 per seat, the cost is two-thirds that of a traditional arena seat, according to Rhodes, who describes the building as rugged and economical. Crucial to achieving such a tight budget was the team’s use of a co-ordinated bim model estimated to have saved a tenth of the overall building cost, including £300,000 on steelwork alone.

“Leeds Arena was designed as compact as possible for specific volumetric and acoustic purposes, so the thorough integration of all built components was key,” says project architect Nuno Guerreiro.

The building is designed to be flexible enough to cater for all types of events and formats with the help of two floors of internal rigging above the stage and a 60-tonne loading capacity.

The first 16 rows will be retractable to create room for a thrust stage or mosh pit, and for smaller events a curtain can be pulled around both sides to reduce capacity and create a more intimate atmosphere. 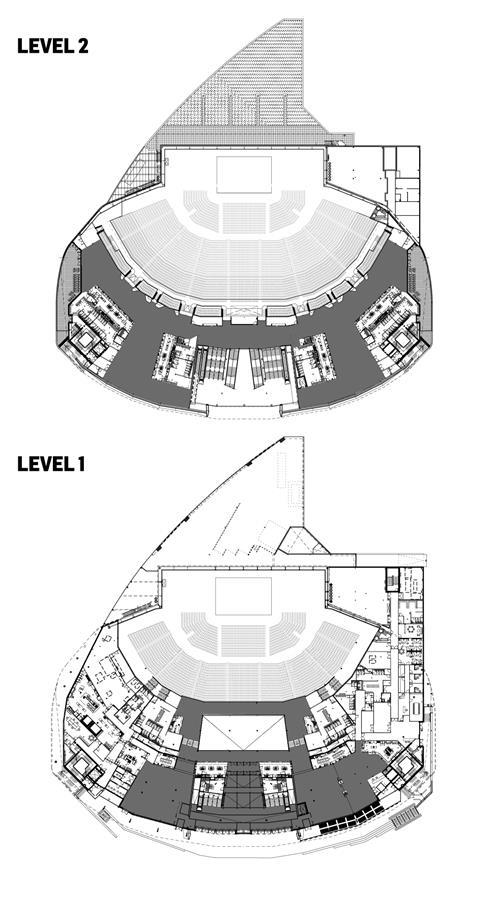 Externally, the honeycomb-like elevation is conceived as a “kaleidoscope” of glass, mesh and metal “shingles” set at 45 degrees and animated by a tracery of LEDs plus projections tailored to suit the event taking place. Windows are located to take advantage of key views over the city. Shingles fade to white towards the top of the building to reduce impact.

“The overall shape of the building and the geometry of the steelwork was the most challenging part,” says Robin Hamill, project manager at Fisher Engineering.

“It didn’t lend itself to very easy structural steel detailing.”

Another issue was an accelerated timetable in order to procure the steel in the most cost-effective way. The arena is due to complete next spring in time for a summer 2013 opening. 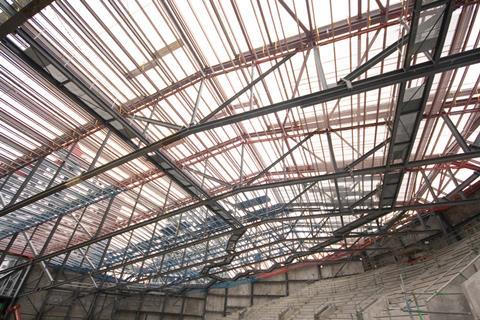 Roof trusses were assembled on site and continuously installed over 75 hours.

Thirteen trusses form the main skeleton of the roof, with spans ranging from 40m to 72m, and up to 75 tonnes in weight. These were spliced in the air and took 15 weeks to install.

The trusses span at 9m centres with five spanning onto the 54m-long proscenium arch truss, which was delivered to site in 32 sections and assembled there ahead of a 75-hour continuous installation.

When Arup joined the BAM Construction project team, after first acting as technical adviser to the council, one of its first innovations was to rework the roof design. Originally the trusses were combined, with two layers of expensive acoustic cassette build-up.

Arup’s more economical solution was to make the trusses deeper in combination, with a 150mm top layer of in-situ concrete and metal decking that forms the roof.

A second internal acoustic layer of boards and insulation is positioned 1,250mm down from the concrete, thermally isolated from the main structure.

In such a city-centre location, acoustic efficiency was a high priority to limit the impact of noise on the surrounding area, so a similar approach has been used for the walls. Here there is a gap of 500mm between the external precast concrete and internal walls.

“We increased the overall mass of the roof to make the acoustics work, pushing up the trusses into the void and making them deeper so they could take the significant mass,” says Arup’s Jim Bell. 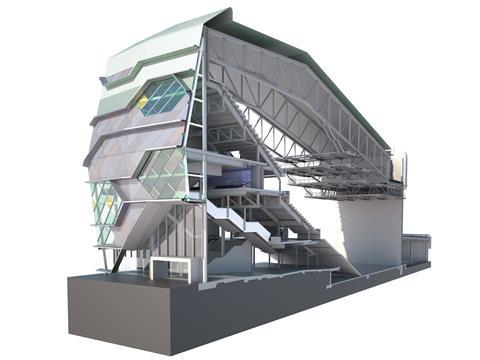 Fifteen buttresses from the main steel structure enable the building to crank at a height of 30m.

Initially, the engineers looked at making this part of the primary structure, but this presented difficulties because of the interface with the glazing system, so the facades are instead supported by a secondary structure.

“The main challenge was the geometry. Every element was inclined in two directions and it’s very difficult to draw that, which is where the power of 3D modelling comes in,” explains Arup’s Jim Bell.

Because of the 45-degree angle of the glazing system, a lot of the steel connections had to be co-ordinated within hidden connections. With the crank creating an incline of 22 degrees, drainage was also an issue, especially over the entrance where the audience would be vulnerable to rain run-off.

The solution was a system of hidden gutters and pipework within the tracery of the facade to take the water away to the sides and into the rainwater storage system.