Ike Ijeh takes a look at the key venues 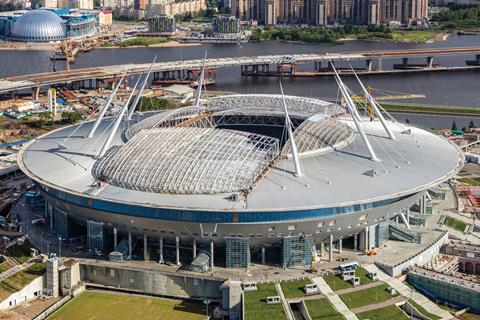 Not only does the home ground of Zenit Saint Petersburg football club occupy a prominent island site that offers commanding sea views over the Gulf of Finland, it is also said to be one of the most expensive and technologically advanced stadiums ever built. When celebrated Japanese architect Kisho Kurokawa won the competition to replace Saint Petersburg’s old Kirov stadium in 2007, he already had World Cup form, having designed Japan’s Oita stadium for the Japan-South Korea 2002 tournament.

Rather oddly, Saint Petersburg’s design is based on that of Kurokawa’s Toyota stadium also in Japan, an unusual pairing considering that Saint Petersburg is President Putin’s home city and he is said to have specifically conceived the new stadium as a symbolic showpiece of Russian might. Conceptual recycling aside, the stadium’s sliding pitch, retractable roof and snow-melting, hot air-inflated membrane structure are impressive feats. As is its distinctive “saucer” bowl punctured by inclined masts, all based on Kurokawa’s “Spaceship” concept.

None of this came without stratospheric levels of cost and controversy: when the original 2008 completion date was missed, initial funders Gazprom pulled out and switched their attentions to the infamous and even more controversial Gazprom Tower proposals in the historic centre of the city.

Costs also soared from an initial budget of £190m and the project was blighted by delays that lasted a decade. Nevertheless, the venue’s hitch-free hosting of last year’s Fifa’s Confederation Cup bodes well for this month’s tournament.