The first safe standing area in an English football ground is set to open next season, after AFL Architects advised Shrewsbury Town FC on the feasibility of a section at the club’s New Meadow stadium.

The 500-capacity scheme will use the same ‘rail seating’ which was fitted at Celtic Park in Glasgow, home of Scottish champions Glasgow Celtic, last summer. Rail seats are attached to barriers and can tip up allowing spectators to stand without the threat of crowd crushes.

The League One side applied to the Sports Ground Safety Authority (SGSA) for permission to install the rail seats, following consultation with AFL, and hopes to have the section open for use during the 2017/18 season.

“Shrewsbury approached us to provide technical guidance, given our experience as stadium architects,” said John Roberts, sports director at AFL. “We advised on the best location for the rail seating, to ensure other spectator sight lines are not blocked, and ensured that the size of the stairways, vomitories, toilets and concourse areas conformed to stadium regulations.

“They also needed to demonstrate how they would manage the crowd and control access to the area, which were issues Celtic experienced last season.” 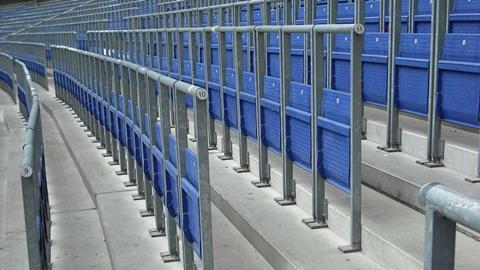 The safe standing area will be located at the back of the New Meadow’s south stand and will replace existing seating although the capacity of the stand is likely to remain the same. Shrewsbury said it hopes the section will “improve the atmosphere in the stadium and provide a safer area for those supporters who wish to stand”.

The club estimates the cost of installing the rail seating will be £75,000, which it intends to raise through crowd funding.

“The project will cost Shrewsbury money in terms of installation and management, but they see it as a better way of managing fans’ safety, while also improving the experience,” said Roberts.

Shrewsbury’s application will be reviewed by the SGSA, which regulates safety through local authorities at the 94 Premier and Football League grounds in England and Wales,

Standing sections were banned in English football’s top two tiers following the 1989 Hillsborough disaster. However, a process agreed between the Football League and SGSA this spring allows 29 lower division grounds not covered by the all-seater legislation to apply for permission to install rail seating.

The SGSA has also confirmed that the next edition of its Green Guide for spectator safety at sports grounds, due out in early 2018, will include a section on rail seating.

Shrewsbury, which has a capacity of 9,875, said it hoped the application process will “be a matter of weeks, not months”.

A growing number of clubs have expressed interest in installing safe standing areas. At Championship club Brentford, AFL is designing the new stadium so that a section can be easily converted to safe standing. Premier Leage clubs Tottenham and Chelsea, whose new stadia having been designed by Populous and Herzog & de Meuron respectively, are making similar provisions in their new grounds.

Safe standing are used widely across Germany’s top division, the Bundesliga, with eight clubs, including Borussia Dortmund and Bayer Leverkusen, out of 18 having them.