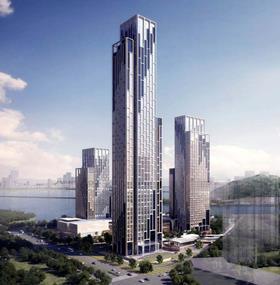 Architect 10 Design has won a competition for a mixed-use scheme at Hengqin in China.

It will feature three towers of 130m, 180m and 250m respectively and will also include food and retail facilities. It is set to be completed in 2019.

Called Huafa Plaza, the scheme brings together three sites within the new Hengqin District in Zhuhai and is being built on Hengqin Island for Chinese developer Huafa.