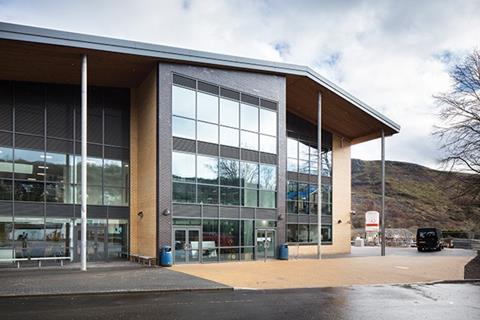 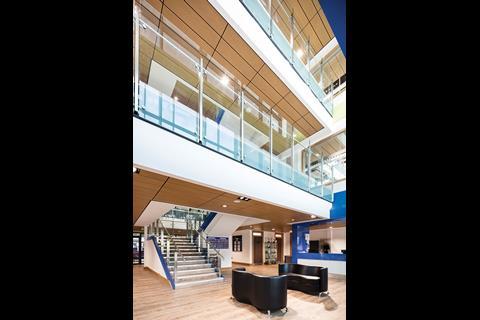 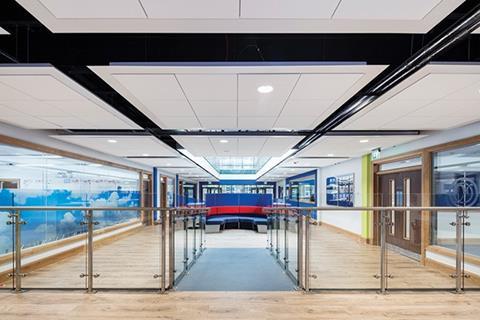 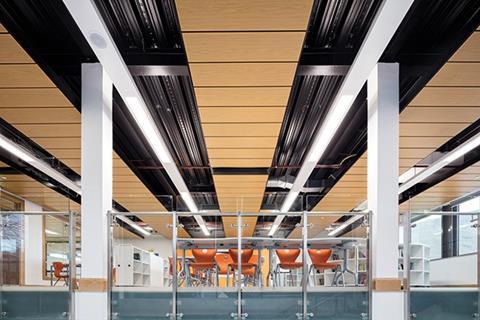 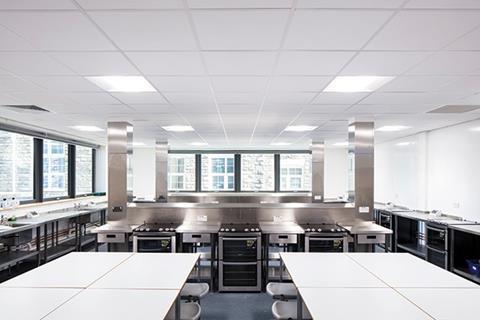 A mixture of metal and mineral fibre systems from Armstrong Ceiling Solutions were specified for a new teaching block for several reasons at least.

Used throughout the new 6,500m2 building, the D-H 700 metal Hook-On canopies with acoustic fleece were installed in classrooms whilst the Axiom Knife Edge with Ultima+ Vector tiles were used in other areas. Perla 600mm x 600mm mineral fibre tiles were also fitted in classrooms and toilet areas.

In addition, the 1,200mm x 300mm MicroLook 8 Lay-In tiles finished in an oak wood effect and featuring a 100mm Axiom Classic profile were used in spaces such as circulation and break-out areas and the three-storey atrium.

The two to three-storey steel-frame building replaces a 1970s three-storey CLASP-type teaching block to bring accommodation into the 21st Century and was designed to BREEAM “excellent” and BIM Level 2 standards.

A spokesman for Neath Port Talbot Council said: “They are aesthetically pleasing. The ceiling rafts in the classrooms complied with sound and visual requirements but also allowed us to use the exposed structural slab as thermal mass.”

The 19-month long build by main contractor Dawnus Construction as part of the South Wales Regional Contractors Framework was challenging due to the tight site and restricted working spaces.

SAM Drylining contracts manager Ian Bartlett said: “This was a large extension to a comprehensive school and consisted of several different ceiling make-ups, including Armstrong’s metal acoustic rafts and Knife Edge canopies, all floating in different areas with no ceilings above, and then several thousand metres of Armstrong Lay-In grid”.

“The programme was a challenging one but was co-ordinated closely with all other subcontractors on site. If alterations to sequence or design were required Armstrong’s technical team attended to site to discuss and were able to agree changes at site level, making the installation as painless as you’d expect.”

Armstrong area specification manager Adam Mansell said: “Armstrong’s portfolio of different product materials and finishes really came into its own on Ystalyfera. From the standard suspended ceilings to Axiom, metal and metal wood-effect canopies, these offered a greater flexibility in design for the architects.

This was a team effort in which Armstrong’s architectural specialties team worked closely with the specifiers, main contractor and ceiling contractor.”

For more information, go to www.armstrongceilings.co.uk