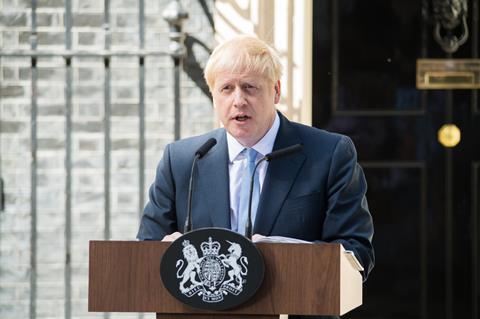 The RIBA has welcomed the prime minister’s announcement that he intends to pursue agreement on mutal recognition of qualifications in his trade negotiations with the EU.

It is a significant issue for the profession since a fifth of architects working in Britain are from the EU, and the ability to cross borders hugely enriches British architecture, said Vallance.

Mutual recognition of qualifications was one of a select list of issues that Boris Johnson described as priorities in a written statement to parliament yesterday setting out his proposed approach to the free trade negotiations with the EU.

An agreement ”should provide a pathway for the mutual recognition of UK and EU qualifications, underpinned by regulatory cooperation, so that qualification requirements do not become an unnecessary barrier to trade”, he said.

He added that there should be no tariffs, fees, charges or quantitative restrictions between the UK and the EU.

And there should be measures to minimise barriers to the cross-border supply of services and investment, he said.

Johnson also said the agreement should include significant reciprocal commitments on temporary visits by individuals so that both EU and UK nationals can undertake short-term business trips to supply services.

Vallance said: “I am pleased to see the prime minister identify MRPQ as a priority for the future trade deal between the UK and EU. As the RIBA and the Architects Council of Europe have made clear, MRPQ is essential for the sector to grow and without it, UK and EU architecture practices will struggle to recruit the talent they need.”

But he warned: “Until the European Commission and UK government agree tangible details, architects remain unable to plan for the future.”

Johnson’s written statement accompanied a speech at the Old Royal Naval College in Greenwich, in which he said the UK was “re-emerging after decades of hibernation as a campaigner for global free trade”.

”We have made our choice: we want a comprehensive free trade agreement, similar to Canada’s,” he said. “But in the very unlikely event that we do not succeed, then our trade will have to be based on our existing withdrawal agreement with the EU. The choice is emphatically not ’deal or no-deal’.”

He said he wanted to engage with Commonwealth and African nations as well as Japan and the US, and vowed that Britain would be ”open, outward-looking, generous, welcoming, engaged with the world, championing global free trade now when global free trade needs a global champion”.

In a speech littered with metaphors, Johnson claimed free trade was being strangled by protectionists around the world and likened the UK to Clark Kent, ready to ”leap into the phone booth and emerge with its cloak flowing as the supercharged champion of the right of the populations of the earth to buy and sell freely among each other”.