Ilke Homes has been selected to deliver a 622-home modular scheme on land acquired from pharmacy chain Boots in Nottingham.

The scheme, billed as the largest low-rise modular rise scheme in the UK, will see the development of 43 acres of land close to Boots’ headquarters in Beeston.

Ilke appointed architects HTA Design to deliver 505 houses and 11 apartments. The homes will be manufactured at Ilke Homes’ factory in Knaresborough, Yorkshire. 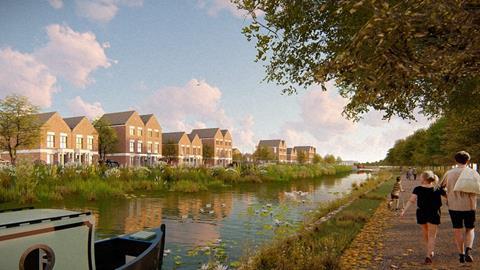 How the proposed homes will look

All homes on the site will have an Energy Performance rating of at least ‘B’.

The project, which will become Ilke’s flagship scheme, is part of the wider 286-acre Nottingham Enterprise Zone. The selling price of the land is understood to be around £25m to £30m.

It is the first time that Boots has released any part of its Nottingham site holdings for housing, although the area has been allocated for residential development since 2014.

Tom Heathcote, executive director of development at ilke Homes, said: “The site is steeped in rich heritage and has been a central part of Boots’ success story over the last few decades, so we are incredibly excited for the opportunity to work alongside Boots, HTA Design, and the local stakeholders at both Broxtowe Borough and Nottingham City councils to truly transform this redundant industrial space into a well-designed new community and provide better homes in a better way.”

A reserved matters planning application will be submitted “imminently”.