Lawyers for the bereaved and survivors of the Grenfell Tower fire have said products firms Arconic, Celotex and Kingspan carried out “widespread and persistent wrongdoing” in the run up to the fire.

The next phase of the inquiry into the disaster began last week after contractors and consultants spent weeks being grilled about their involvement in refurbishment that finished months before the June 2017 fire which killed 72 people. 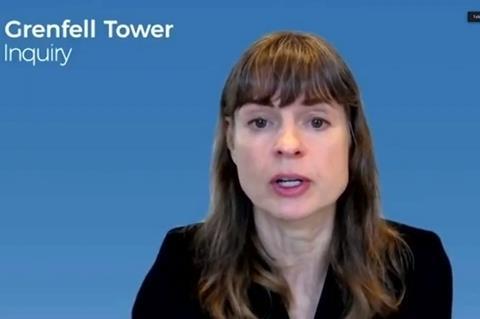 In her opening statement, the lawyer for bereaved survivors claimed last week that testing carried out by one of the companies that made flammable cladding used on the tower was “complete spin”.

Stephanie Barwise QC, representing the survivors, criticised Kingspan as well as Arconic, the US manufacturer of the flammable cladding panels, and insulation maker Celotex. The companies still did not believe they did anything wrong, she said.

The inquiry was shown one email in which a senior executive at Arconic, which made Grenfell’s polyethylene (PE) core cladding panels, told colleagues that a shortfall in the product’s fire performance was “something that we have to keep as VERY CONFIDENTIAL!!!!”. In another, he admitted PE panels would spread fire “over the entire height” of a tower.

And Celotex, which made most of the plastic foam insulation, produced an internal presentation in 2014 that announced it would be able to market its combustible product partly because “nobody understood the test requirements”, the inquiry heard.

Stein said: “These companies… knew their materials would burn with lethal speed and yet they marketed their products into an uncaring and underregulated building industry which spread them around like a disease.”

All three companies have denied wrongdoing. In statements to the inquiry last week, Arconic said the main fault lay with those responsible for the refurbishment, Celotex accused construction professionals of failing to follow Building Regulations and Kingspan said the outcome of the fire would have been no different if non-combustible insulation had been used.

Yesterday’s hearing also heard from Samantha Leek QC, representing the Building Research Establishment (BRE), who said the body “wishes to express its concern and dismay about the disclosures from both Celotex and Kingspan in respect of misleading information provided to BRE about components and cladding systems tested on their behalf”.

Leek said the BRE had “no involvement in the testing or classification of the cladding systems installed on Grenfell Tower before the tragic fire”.

Representing Siderise Insulation, which supplied cavity barriers for the refurbishment, Oliver Campbell QC said in his opening submission the lack of appropriate testing for the type of ACM cladding used in the Grenfell refurbishment was a “collective failure by the construction industry”.

Four employees of Arconic are refusing to give oral evidence to the inquiry, blaming a French law which prohibits disclosures to foreign courts.